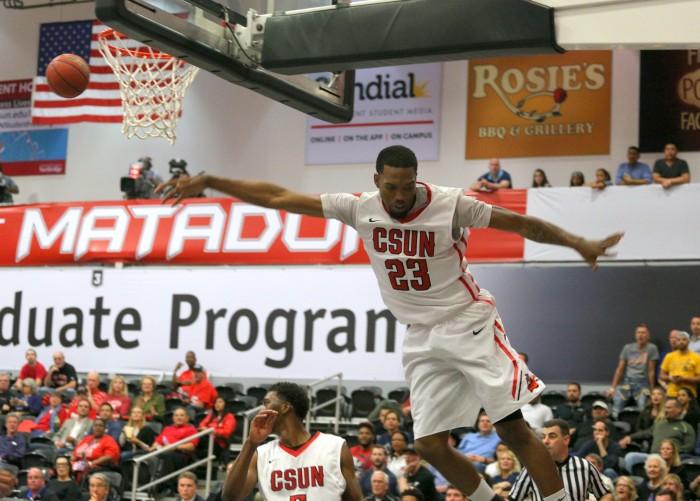 CSUN was never able to get much offense going as the team shot only 31.3 percent from the field and made four-of-22 three-point attempts.

The Matadors dominated on the glass by a count of 49-to-36.

“We started off taking bad shots,” said junior guard Aaron Parks. “That’s the result you get when you come out like this against a good team.”

Parks was the Matadors’ leading scorer. He had 18 points on five-of-17 shooting as well as making seven-of-eight from the charity strike.

The Gauchos couldn’t be stopped as they shot 50 percent from the field for much of the game and finished nine-of-19 from three.

“I thought they played really well and made a lot of shots early,” said CSUN head coach Reggie Theus. “I just think they just came out and had more energy tonight.”

The CSUN offense frequently didn’t take the ball to the hole; instead, the offense settled for jump shots. The Matadors scored 26 points in the paint.

The Gauchos began the game with a hot start, scoring on its first four possessions to take a 10-1 lead over the Matadors in the first three minutes of the game.

“I think we weren’t there mentally — physically we weren’t focused or ready to go and it showed,” said senior forward Tre Hale-Edmerson. “We just got to play better, harder, smarter than that.”

Over the next nine minutes, the Gauchos went on a 25-to-five run to take a commanding 35-10 lead.

The Gauchos dominated the second-chance points category early on by scoring 16 to outscore the Matadors, 20-to-six.

The shots were not falling early on for the Matadors as they shot 20 percent from the field on six-of-29 shooting in the first half.

The Gauchos had a strong start to the second half, going on a 16-to-six in the first six minutes.

UCSB held a 38-point lead until the Matadors managed to cut the lead to 29 after forcing turnovers, playing tough team defense and connecting on the fast break.

“I do appreciate the fact that our guys don’t stop,” Theus said. “They keep playing hard.”

CSUN travels to Hawai’i on Saturday for a 9 p.m. tipoff.