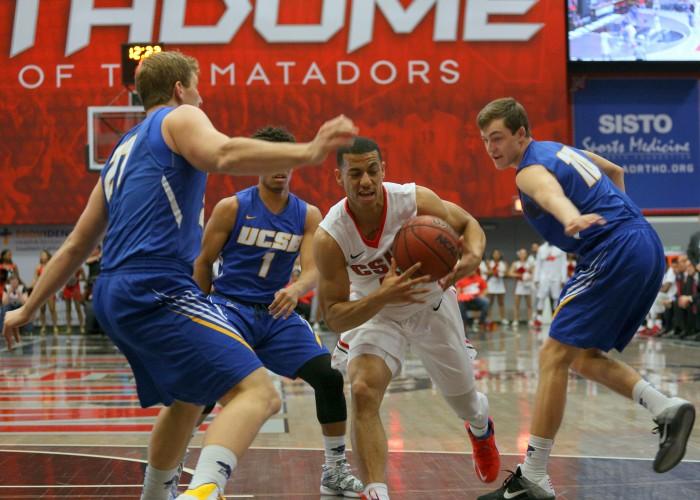 Junior guard Kendall Smith drives past three Gauchos during the first half of Thursday's game, February 25, 2016. The Matadors would lose the game 78-63. (Max Zeronian/Sundial)

CSUN men’s basketball dropped its second-straight contest as the Hawaii Rainbow Warrirors swept the season-series after the Matadors lost on the road, 89-78.

CSUN shot 42 percent from the field compared to the sharpshooting by Hawaii that netted the team a 52 percent clip. CSUN only converted one-of-nine shots from the 3-point line were made.

In the loss, the Matadors were led in scoring by junior guard Aaron Parks and his 18 points on five-of-nine shooting while also adding six rebounds.

After trailing by nine, the Matadors went on a 7-0 run to cut the lead to two. A jumper by sophomore forward Tavrion Dawson made the score 15-13 with a little over 12 minutes to go in the first half.

At the 2:51 mark, the Matadors tied the game at 37 following a free throw by sophomore forward Zacarry Douglas.

Two possessions later, the Matadors took its first lead of the game, 41-39, after sophomore guard Jerron Wilbut was able to get loose and make a cut to the basket for a lay-up.

Going into the half, the Matadors trailed the Rainbow Warriors 43-42.

Early in the second half, the Matadors tried to keep pace with Hawaii following a lay-up by junior guard Kendall Smith, cutting the lead to 47-45.

Aaron Parks shot a free throw with eight minutes to go in the game, cutting Hawaii’s lead to eight. It was the smallest deficit the Matadors would cut into the Rainbow Warrior’s lead since the first few minutes of the second half.

Ultimately, the Matadors were outpaced by the Rainbow Warriors and now look to its final game of the season on Saturday, March 5th against UC Davis at 7:30 in the Matadome.