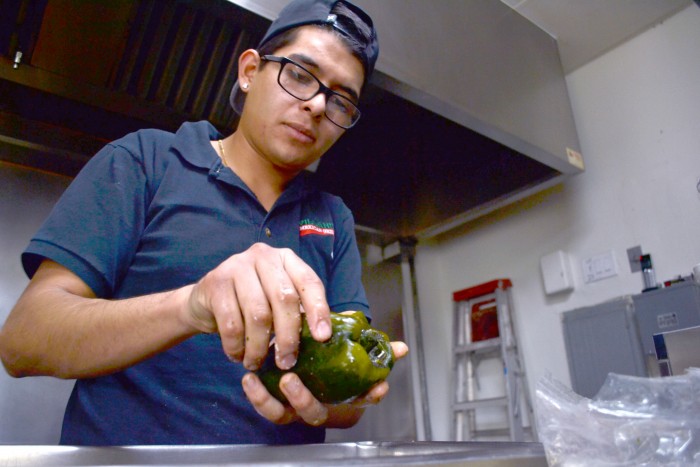 The Gunther and Jacobs brothers walked into Villanueva Mexican Grill with a crate full of hand-picked lemons, and walked out with a hot order of super nachos.

“We needed lemons,” said the son of Villanueva’s owner, Armando Jr., 21, with a shrug.

It was a good deal for the four local kids as well, according to Andrea Dagger, 15, who says that “the nachos here are way better here than anywhere else in Northridge.”

The meats, salsa, guacamole, beans, and practically everything else offered on the menu is freshly prepped, cooked and served throughout the day from scratch by the Villanueva family. The restaurant’s options include vegetarian, chorizo, carne asada, three styles of pork, chicken, fish, and shrimp dishes.

Anmol Kumar, 24, loves spicy food, and says he has high standards for his veggie burritos. He ranks Villanueva close to his favorite downtown food trucks, Leo’s or El Chato’s.

“It’s the flavor… and their salsa is perfect,” says Kumar.

Guests that order a burrito may add their choice of five salsas, and four other condiments into their burrito before it is wrapped. This allows customers with the hardiest taste buds to pile on the heat without making a soggy mess of their meal. Villanueva’s staff are also happy to make alterations to suit specific tastes and dietary concerns.

Suddith has been a fan of Villanueva’s for more than five years. He and his fiance, a senior sociology student Jennifer Benitez, 25, eat there every week.

It’s more than the food that makes people want to return to Villanueva’s.

“They treat everyone like family,” says Maria Lomeli, 43, a regular of Villanueva’s for more than nine years.

Villanueva’s has been making regulars out of locals since it first opened in 2007. Today the Villanuevas work hard to build upon their reputation for good food and hospitality.

That’s not apparent from the easygoing demeanor of Armando’s cousin, David Villanueva, 19. He’s usually found working the grill, ready with a greeting from behind the counter.

“I like being in the kitchen, asking people about their day, and making them happy,” says David.

Service is pleasant, orders come out fast, and prices are reasonable despite the restaurant’s attention to detail. Burritos cost between $6 and $8, and tacos start at $1.39. Students that show a CSUN ID or mention the Sundial will receive a 15 percent discount on their order.

Find a seat between 8 a.m. and 9 p.m. near the corner of Devonshire and DeSoto.