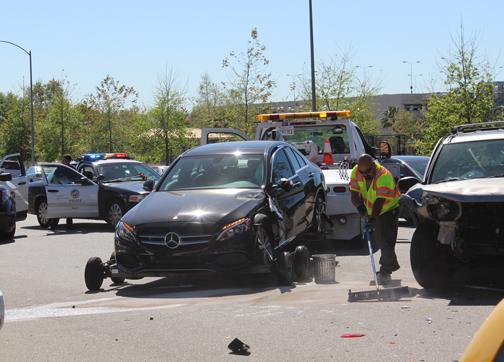 A Nissan Pathfinder collided with a Mercedes-Benz when the Mercedes was making a u-turn. James Fike / The Sundial

A section of Zelzah Aveue was closed today as police investigated a three-car collision.

Two people were sent to the hospital for injuries, according to police.

The crash occurred around noon at the intersection of Zelzah Avenue and Prairie Street, police said.

Police said a Nissan Pathfinder was going northbound on Zelzah Avenue and collided with a Mercedes-Benz trying to make a u-turn. Police said the force of the crash pushed the Mercedes across the street into to a parked car.

Anthony Davison, a broadcast journalism major, said he had been waiting for an hour and a half while the crash site was being cleaned up. Davison is the owner of the parked car.

Davison saw the drivers of the Mercedes and the Pathfinder taken away in an ambulance.

The intersection was re-opened a little after 2 p.m.

James Fike contributed to the reporting of this article.