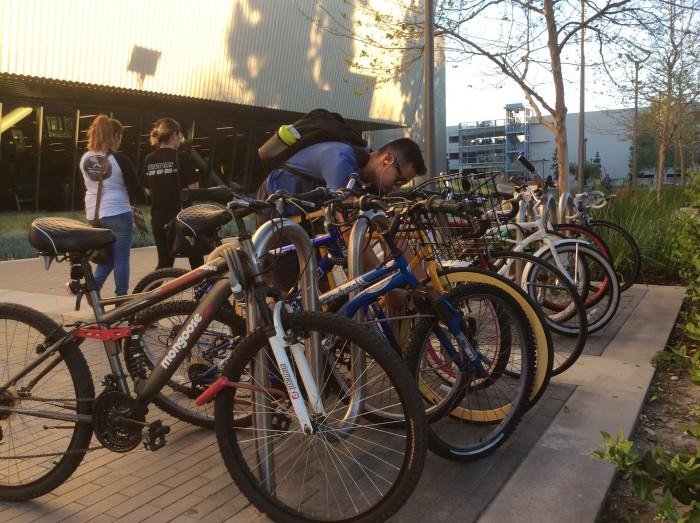 Jose Valencia, a Business Management major, unlocks his U-Lock to get his bicycle in front of the Student Recreational Center. Photo credit: Erik Luna

A crime trend alert was issued by CSUN police after a recent slew of bicycle thefts with five stolen in three days.

There were 10 bicycle thefts in February with five of the thefts having occurred from Feb. 24–26 outside of the UPA complex, Redwood Hall, Cypress Hall and the Oviatt Library, according to the CSUN Police Department’s daily crime log.

In an email regarding the bicycle thefts, the department suggested students use steel U-locks to secure a bicycle rather than a cable lock, as they are more difficult to break through.

In a short study of the bicycle racks outside of the Student Recreational Center, 26 of the bicycles secured to the racks were locked with a U-lock, while 17 used cable locks.

What are your thoughts on the recent bicycle theft trend?

Valencia: I see a lot of the reports about bikes being stolen. It’s pretty petty. To think people still have to resort to stealing bikes — I mean, it’s pretty low.

How do you secure your bike?

Brooks: I really hate the U-Lock, because I feel that they are really awkward to use if you’re trying to lock up the front tire as well.

Why don’t you put it in the police compound?

Valencia: Matter of time. Usually, I’m always busy. I’m an upper grad, I have exams, studying and work. I’m really not on campus as much as some of the people who are here all day. For those people, I would recommend it. I pretty much leave it [at one place] for a class, then I leave.

How often do you bike to school?

Denina: Almost everyday. Mondays, Wednesday and Fridays are my full days, and Tuesdays and Thursdays are my days off, but I still come to hang out with my club.

Brooks: Everyday, Monday through Friday, and sometimes the weekends too.