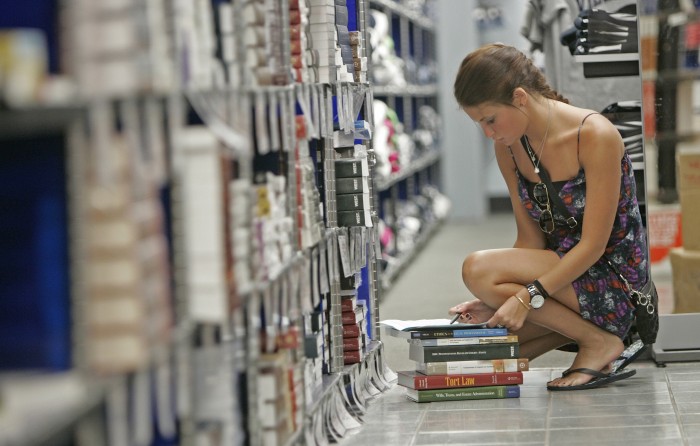 Let’s face it — college can be expensive and many full-time students have to work full-time just to get that education. Trying to strike a balance between the two can be overwhelming.

According the Financial Aid and Scholarship Department, the cost of a full year of schooling for an undergraduate student is estimated to be $21,792 for those living off campus and $16,184 if living with a parent or relative.

Jose Sanchez, a 20-year-old business management major, described what it’s like to be a full-time working student.

“There’s times where I’m not too tired, but I just don’t have enough time,” Sanchez said. “I’m cramming everything at the last minute.”

As part of Target’s logistic process, responsible for stocking merchandise, unloading the trucks and many other jobs, Sanchez works an exhausting job.

“Pretty much it’s physical work,” Sanchez said. “I have to be walking around all day, lifting boxes, making sure you’re counting right, you’re putting stuff in the right place.”

Sanchez is one of many students in this situation. According to a study from Georgetown University’s Center on Education and the Workforce, about 25 percent of working students in the U.S. are both employed full-time and enrolled as full-time students.

As a full-time Ralph’s cashier, Flores tries to make the best of it.

“I try to stay positive when I go to work, but somedays it’s harder than others,” she said. “Especially when you haven’t slept after so much school work.”

“I currently work two jobs,” Aceves said. “My primary Monday through Friday job consists of me working through LAUSD’s after-school program as a sports coach, and on the weekends I work at the mall at a clothing store,” Aceves said.

For Flores, Sanchez and Aceves, working full-time is necessary to pay for their education.

For Sanchez, staying out of debt is important.

“I’m paying off school with the money I’m earning pretty much,” Sanchez said. “I just don’t want to get into a debt with loans.”

Similarly, Aceves rather pay to tuition himself than involve his parents. “For me, working is an essential part,” Aceves said. “I hate burdening my parents for money even though they would gladly give it to me.”

Choosing classes becomes a difficult task when full-time students have a tight schedule with their full-time jobs.

“I can’t get classes at a certain time. At the moment, I can’t get any morning classes. I have to get my schedule in the afternoon,” Sanchez said.

Time management is essential when balancing school and work, and each have their own way of doing it.

For Sanchez, sometimes work has to come first.

“I’m not proud of it, but sometimes I put work before school,” he said. “But I usually do it in a way where I know I’m going to be able to get my school work done while to still doing my job.”

Flores decided having a day off would benefit her.

“This semester I made myself unavailable from work on Fridays, so that’s my day to like do work or go hang out with someone,” Flores said.

Aceves puts school before anything else.

“School is a priority and my friends understand that too,” Aceves said. “So first we take care of business and schedule time throughout the week or weekend to relieve some stress and catch up.”

These students believe that their juggling act will be worth it once they graduate.

“Nothing great in this life comes easily, and I know my efforts and sacrifices are not in vain,” Aceves said. “They will pay off as long as I don’t give up.”