CSUN envisioned at the heart of valley transit 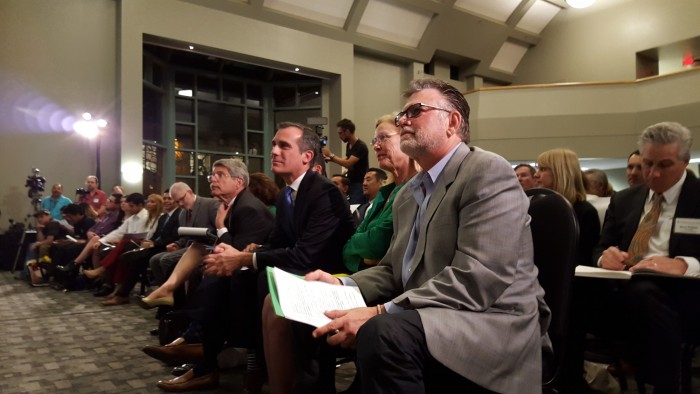 Hertzberg and the coalition of Valley businesses and civic organizations that hosted the summit encouraged the passage of a new sales tax proposed for the November 2016 ballot, measure R2. They have rallied behind the slogan “it’s our turn,” and hope that these funds will be used to improve transit options in the under-served San Fernando Valley.

“No part of the county should be denied it’s fair share,” Mayor Eric Garcetti said during a speech at the opening of the summit.

A new rapid transit line. This line would tunnel through the Sepulveda pass, relocating the Northridge Metrolink Station closer to Reseda.Expansion of current bus and rapid transit routes.Implementation of new routes.

Many of the projects discussed mirror a series of transit priorities announced by CSUN president Dianne Harrison that would make CSUN a central transit hub for the entire valley.

“We have the capacity to more than double the bus space [at the campus transit center],” said CSUN Vice President of Administration and Finance Colin Donahue. “If Metro can bring the service, we can support it.”

In the short term, CSUN students can look forward to improvements to route scheduling. Los Angeles Metro Deputy CEO Stephanie Wiggins said her organization has partnered with the university to help bus arrivals and departures line up with course schedules. They plan to roll out an augmented schedule in June.

Specifically, Metro routes 239 and 744 will run later into the evening. These changes will make an immediate impact on students that take night classes and don’t drive, like Associated Students President Jorge Reyes. He said that the lack of transit options on campus often limits these students’ abilities to take on jobs or internships, and forces some to leave class early just to make it home at night.

These changes were implemented as a direct result of discussions at the first San Fernando Valley Transportation Summit, according to Wiggins.

L.A. Metro is also currently making progress on improvements to the Orange Line. Grade separations, tunnels or overpasses that eliminate intersections of automobile traffic and bus routes, are currently underway. These improvements will decrease ride times on the Orange Line and set it up for a future conversion to a Rapid Transit line.

Wiggins said that having this and other “shovel-ready” programs in the works will help legislators view the Valley as a prime candidate to receive funding from measure R2.

“The terrible joke of it all is that you have terrible transit in the markets with the highest propensity to use it,” Ackerman said.

Many of these improvements will depend upon the passage of measure R2 and Valley leaders are making efforts to ensure that their constituents’ interests are represented on the November 2016 ballot.