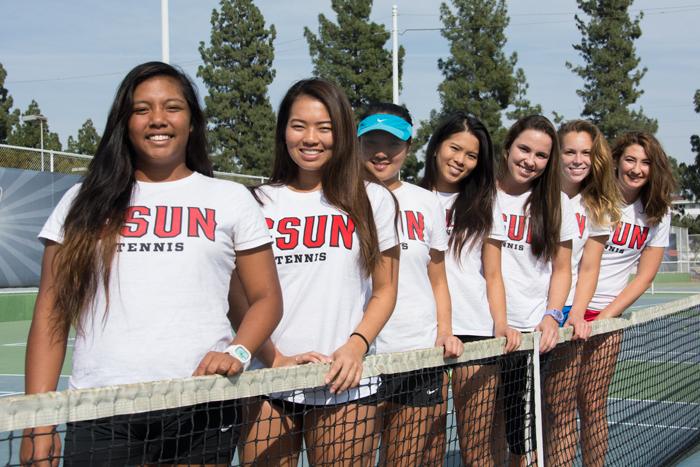 The women's tennis team is full of international students along with United States students to form a diverse team that functions both on and off the court. (Raul Martinez / The Sundial)

CSUN is a campus known for having a diverse student population, with students from various states, countries and backgrounds.

The CSUN tennis team is no exception.

With a team made up of women from Taiwan, South Korea, Hong Kong, Russia and Hawaii, language can be a barrier in the team’s communication.

“Maybe the language barrier,” said Leslie Chang, a senior tennis player from California, when asked if there were any disadvantages to having a linguistically diverse team. “But we speak english all the time, and in school we speak English, that’s the only negative one I can think of and it hasn’t been a problem.”

However, talking in different languages and coming from different backgrounds has fostered a unique way of communication and practice.

For instance, everyone makes an effort in practice to make their conversations as easy as possible to understand by using simplified words or phrases.

Another way to combat the language barrier, the team utilizes visual demonstrations where team members and the coach step in to show one another how to do a motion or technique. There are also one-on-one practices in which the coach works personally with each player.

In addition to the precautions taken at practice, some members of the team use other nonverbal cues in games to communicate.

“We understand each other and of course there’s some signs for tennis, this is secret though,” said junior Mickey Hsu, as she laughed. “I’m just kidding, hand signals.”

Moreover, they have used the linguistic diversity as an advantage.

Although the team functions and communicates smoothly now, that wasn’t the case early on. For instance, sophomore Elisaveta Nosenka, a native of Russia, struggled with communication early in her time at CSUN.

She remembers being very shy at first because she was afraid if she said something wrong everyone would make fun of her. However, it was the complete opposite.

“They would correct me every time I said something wrong,” Nosenka she said. “Every semester our communication gets better and better because everyone is so open to helping one another out.”

A large part in Nosenka’s adjustment was the bond she formed with junior Kiryang Kang, who is originally from South Korea.

For her, it felt easier to carry a conversation with Kang because of the similar challenges they faced. They helped one another out during practices even though they both had strong accents and both knew very little English.

“By the end of the year we would look at each other and we understand each other immediately,” Nosenko said.

Road games also allowed the team to spend time together by traveling on buses and staying in hotel rooms together, which was spent learning how to communicate more effectively.

It also opened the team’s eyes to diverse set of people, cultures and languages that tennis has brought together.

“It’s nice to see the different perspectives from international students and how they see tennis and the different practicing styles,” said sophomore, Arpe Bagumyan.