Serial at the VPAC 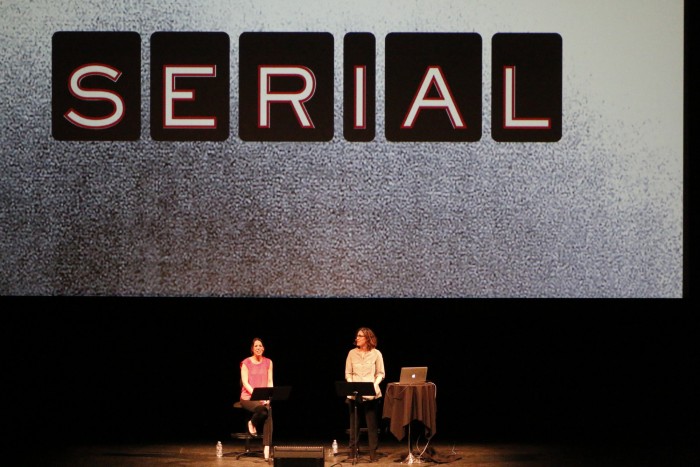 Julie Snyder and Sarah Koenig, the creators of the popular podcast, SERIAL, described the process of creating their award winning show March 5 at the VPAC. Photo credit: Nicollette Ashtiani

The live presentation, held at the Valley Performing Arts Center on Saturday night, showcased real tapes, photos, emails, digital files, voice messages and personal anecdotes to help tell the story behind the first season of Serial which is a podcast that delves deeply into a compelling true story over the course of a season.

The presenters spoke casually, sharing parodies of the podcast, its subculture, their relationships with the cast and their struggle to write an appropriate and conclusive finale. They also shared with fans and students the crucial bits of advice they were given along the way.

“We should always be looking for the moments in our stories that reflect life the way that it really is, and not to mimic things in other stories because we think that’s the way its supposed to be,” said Snyder. “Reporting stories this way with artistry, I think it creates intimacy, but it also creates empathy. It’s what moves a story from being just like simply interesting to being meaningful.”

The presentation ended with a brief Q-and-A segment, where fans of the show asked about the pitfalls of journalism, the ethical dilemmas that sometimes appear in reporting sensitive cases and questions about Serial Season 2.

“[The presentation] was really good. I didn’t expect them to be so personal,” said Kimberly Hernandez, an attendee and avid listener of the show. “I’ve been a fan since the beginning, so it was really cool hearing the stories about how they got started and everything. I’m so addicted to Serial.”

Koenig and Snyder also gave insight as to why they believe the show is so popular. They said their initial goal was to attract a modest 300,000 listeners—a goal they reached within just five days of launching the show.

“When people were listening, the part of their brain that would light up for TV shows like House of Cards or Breaking Bad or whatever… was also lighting up when they listened to Serial,” said Koenig. “So, they were reacting to it in the way that they’re used to reacting to escapist entertainment, but it wasn’t—it was journalism.”

Currently, Koenig and Snyder are busy creating Serial Season 2, which tells the story of Bowe Bergdahl, a U.S. soldier who walked off his post and was captured by the Taliban for nearly five years in 2009.