Tattoo Tuesday: student not defined by his ink 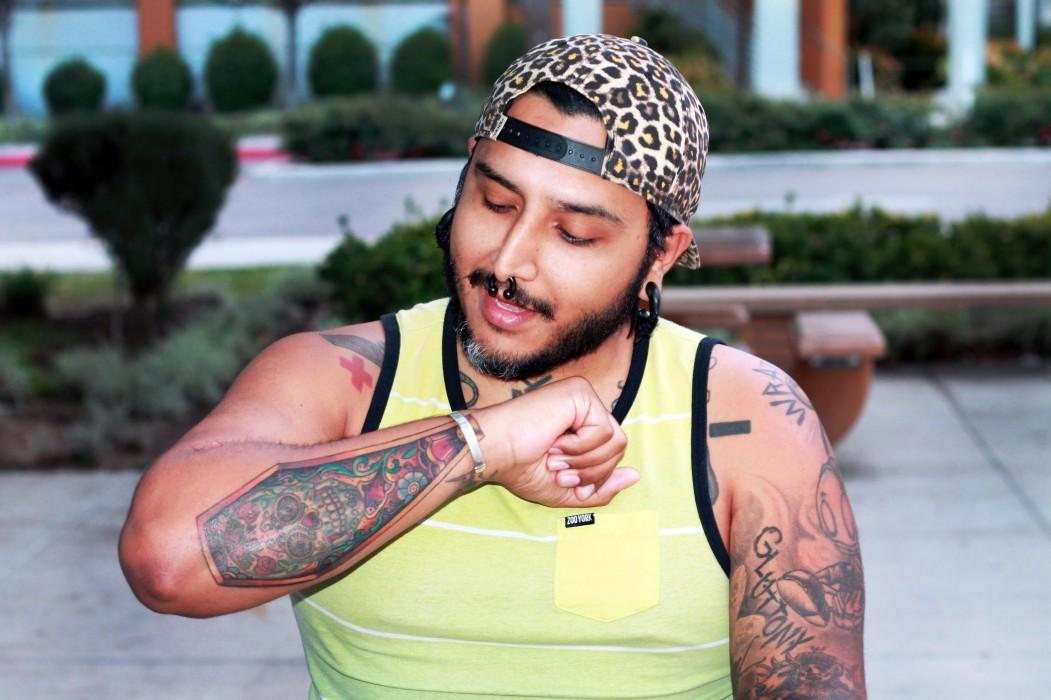 Erik Escareño talks about his various tattoos on his arms with the hope of completing his right arm, as well as the rest of his body. (Ashley Grant/The Sundial) Photo credit: Ashley Grant

Erik Escareño, a 32-year-old CSUN student working towards a master of social work with a double bachelor in deaf studies and linguistics, refuses to allow society to hold him back from pursuing his dream job.

“My first tattoo I got at the age of 22,” Escareño said. “It was an outline of a skull. It was spur of the moment done by a friend of a friend in a garage and it wasn’t very sanitary.”

Since his first experience, Escareño found himself staying away from garages and pursuid his ink session at more professional shops.

“When I was younger I used to go to a couple different tattoo artists, but I primarily stick with one artist now,” he said. “The shop name is Black Letter Tattoo in Baldwin Park and the artist’s name is Ray Lee. He owns his own single studio and I go to him for the majority of my work now.”

In the last 10 years, Escareño has added so many tattoos to his collection that he stopped trying to keep track.

“I stopped counting because they all started blending together,” Escareño said. “I have the majority of my left arm complete. I have some on my legs, my entire chest is covered and some of my back. I’m working on my completing my other arm.”

Throughout the mixture of ink Escareño has, there are tattoos that have impactful meanings and some that are simply “meaningless” and “just look good.”

“I have tattoos that have a lot of meaning and are pretty personal,” Escareño said. “I have my grandparents on my leg, which is my entire foundation.”

Although tattoos have become part of the norm in society, it still is something people find to be taboo in many work places and religions, but for Escareño tattoos shouldn’t define a person or dismiss them.

“I’m very adamant that tattoos are not my resumé and that I am very, very qualified in the majority of work that I’ve experienced over my lifetime,” Escareño said. “If they are unaccepting of that, then they will lose me as an employee very quickly.”

Although Escareño said he will not allow anyone to force him to cover up his tattoos or alter his mind in where he places them on his body, he has made one exception for one job.

“The only place I wouldn’t get tattooed would be my face and my hands because I work as an interpreter for the deaf and hard of hearing,” Escareño said. “Tattoos can become very distracting and can be very difficult for the majority of people to understand me.”

With only two areas that will remain blank, Escareño plans to completely cover himself in tattoos.