Women’s basketball loses in first round of Big West Tournament 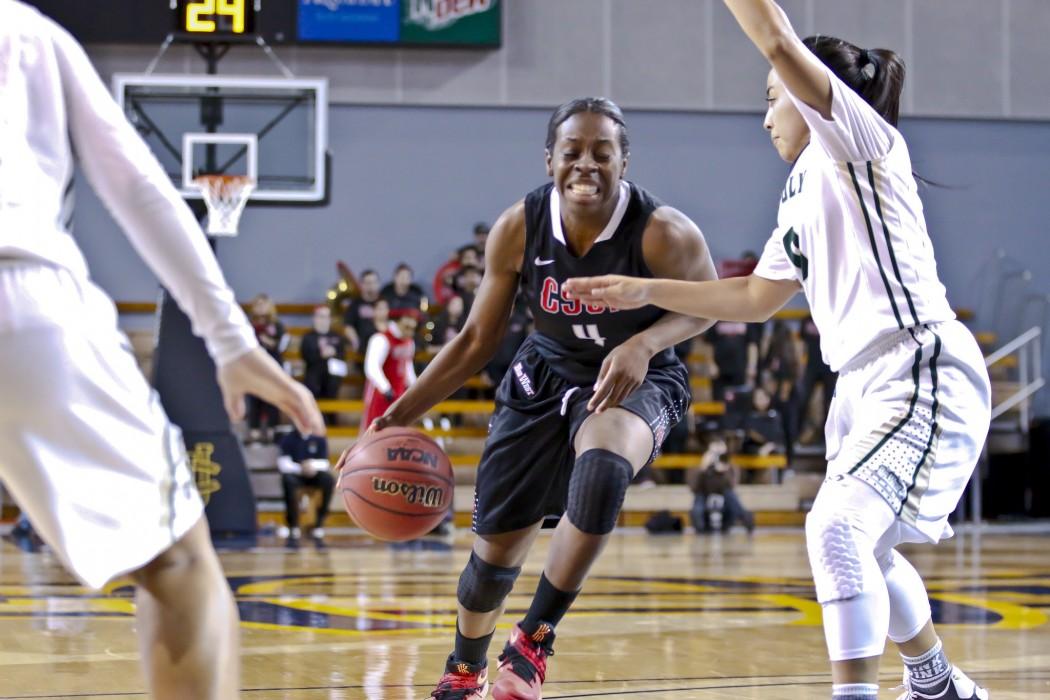 Freshman guard Nautica Morrow attempts to dribble past her defender against the Cal Poly Mustangs on Tuesday, March 8, 2016. The Matadors would lose 72-51 during the first round of the Big West Tournament at the Bren Center in Irvine, California. Photo credit: David Hawkins

They were unable to take care of the basketball throughout the season and it finally caught up with them when it mattered most.

The CSUN women’s basketball team committed 15 turnovers as their season ended with a 72-51 loss to the Cal Poly San Luis Obispo Mustangs in the opening round of the Big West Conference tournament on Tuesday night.

In contrast, the Mustangs only turned the ball over four times and were able to convert the Matadors turnovers into 20 points proving to be the difference in the game.

After falling behind by as many as 17 points in the third quarter, the Matadors attempted a comeback late in the quarter only to have it dashed by Mustangs sophomore guard Dynn Leaupepe. Leaupepe stole the ball near midcourt and sailed in for an uncontested layup as the buzzer sounded effectively ending the Matadors momentum.

A thorn in the Matadors side all night, Leaupepe carved up their defense, scoring on an array of jumpers and drives to the rim en route to finishing with a game high 30 points on 54.5 percent shooting. Twin sister Lynn Leaupepe added 14 points on 63.6 percent shooting and six rebounds.

The Matadors were led by first year center Channon Fluker who was fresh off of being named the conference Freshman of the Year. She ended up with 17 points on 50 percent shooting and nine rebounds, but never really found a rhythm offensively due to the Mustangs swarming defense.

Despite the loss, Matadors Head Coach Jason Flowers felt as if getting knocked out of the postseason the way they did was still a good learning experience for his young team.

“Hopefully from the butt whoopings we have gotten including the one tonight, we learn the same lessons that whatever it is we are doing to get those results need to be changed,” Flowers said. “We need to change some things around and that will definitely happen this off-season.”

It was a difficult season for the Matadors who lost their entire starting lineup from the previous year. For forward Jasmine Johnson the lone senior on the team, this season was especially tough after having been a part of the Matadors back to back conference championships teams.

“It was definitely a tough one. I feel like we should have done better,” Johnson said. “We should have listened more to our coach.”