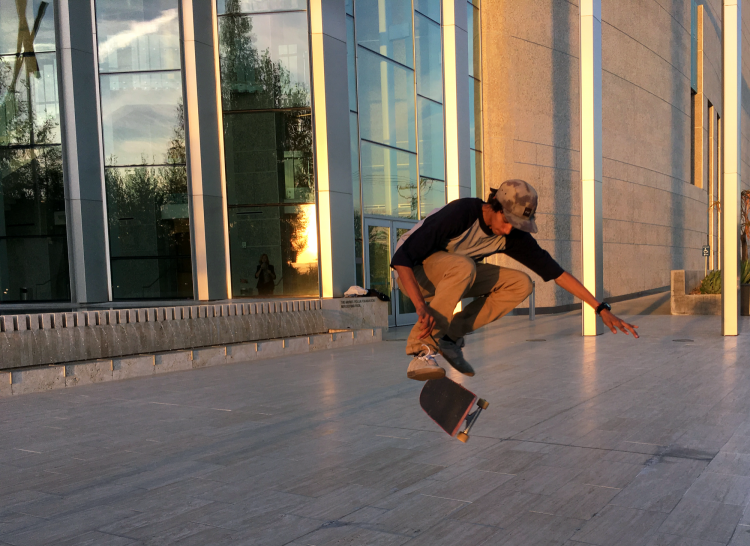 Mauricio Arana, from Patrick Henry Middle school, performing a hardflip in front of the VPAC before being told to leave the premises. (Patricia Perdomo / The Sundial)

A group of community skaters travel from local neighborhoods to ollie, hardflip and catch air around the campus.

For the mix of students from Cleveland High School, Patrick Henry Middle School and one home-schooled student, it has become a daily routine to skate on CSUN after school.

According to the students, they frequently skateboard all over campus – by Sierra Hall and occasionally by the Valley Performing Art Center.

They continue to come back to campus to skate because it offers different areas. There are different rails, a number of stairs and landscapes that provide opportunities to learn and do new tricks.

Arana said he comes to CSUN to skate because he likes to admire the landscape. He has been skating on campus for more than four years.

The next day after breaking his hand he decided to come back and skate at CSUN. Molina said no injury was going to stop him from skating.

The group met each other through mutual skater friends.

After skating for a while here they go down to Parthenia Street to continue skating until they have to go home, said 16-year-old Jose Esquivel.

Sometimes they can’t come back to skate in the same place for a while because campus police have noticed.

Yet when asked to leave campus, they often relocate to other spots they said.