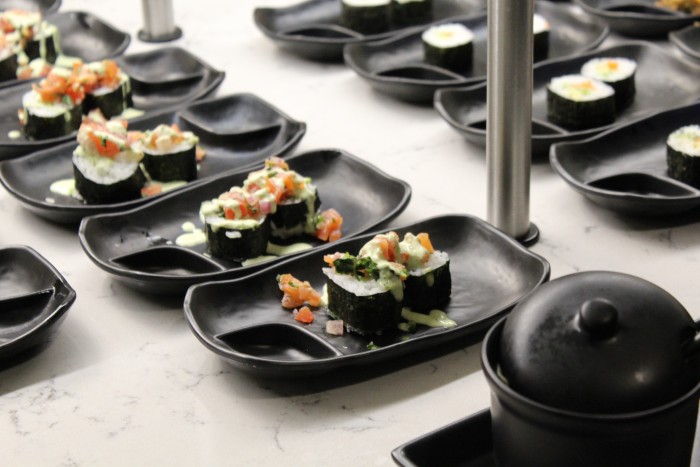 The Bamboo Terrace, located next to Geronimo’s, is a restaurant aimed at immersing Matadors in culture. The cuisine served at Bamboo Terrace is all Pan-Asian inspired.

Daily menu items range from orange chicken to fried rice and even sushi, according to the CSUN dining menu.

Bamboo Terrace was built because more seating was required during student housing expansions. The University Corporation decided to change it up, and give students a creative culinary experience and a dynamic visual environment, according to Associate Director of Campus Dining Betsy Corrigan.

“The dining area design concept begins in an urban setting, then move[s] into the outskirts of town, and then up a level and into a forest where a large tiger is seen peering through the bamboo trees,” Corrigan said.

Much like the concept of Geronimo’s, Bamboo Terrace is an “all-you-care-to-eat” type of restaurant and serves a variety of different cuisines from all over Asia. Some of the countries represented include Korea, Indonesia and Malaysia.

“Where is this fish going to come from? Should I be worried about what is going into the fish?” Sasso said.

According to Corrigan, fish for the sushi will come from places like Peru, Indonesia, Washington and Canada.

“We use good quality fish,” Corrigan said. “It is sushi-quality fish like you would find in any sushi restaurant. The fish is fresh and still holds distinctive, vibrant colors.”

Sasso has yet to eat at Bamboo Terrace, but plans to go soon.

“I just hope the quality of the fish isn’t something I have to worry about,” he said.

When talking about quality, the Real Food Challenge plays a role.

The Real Food Challenge is a national student movement advocating for a more sustainable food system. The University Corporation has a team of student assistants researching the food purchased for CSUN Dining units and determining what foods can be categorized as real food.

Real food is categorized as food that is local and community based, fair trade, ecologically sound, or humane, according to Special Projects Coordinator Karina Ward.

“The important thing to understand is that The Real Food Challenge is a student-driven initiative,” Ward said.

This means students at CSUN have a say in what food is being served here on campus.

Associated Students is the primary student advocate group on campus. They provide programs and services meant to enhance and create a spirited learning-focused campus environment, according to the Associated Student’s webpage.

“As the student government of CSUN, A.S. was an ideal partner,” Ward said. “We launched the campaign with AS in Fall of 2014 and began building a team.”

In terms of how much real food is served at Geronimo’s and Bamboo Terrace, Ward said that 16 percent of the food served is.

“The goal of the Real Food Challenge is to reach 20 percent real food by 2020 campus wide,” said Ward.

When talking to Ward, she said that the possibility of serving exclusively “real food” on campus is “highly unlikely.”

“Meeting the dining needs of our community is a balance of demands, costs and price sensitivity,” said Ward. “For us to serve our campus best, we need to be sure that our community can afford to eat here. In a perfect world, ‘real food’ would be incredibly affordable. In reality, ‘real food’ is costly and to serve it exclusively would significantly impact the affordability of our offerings.”