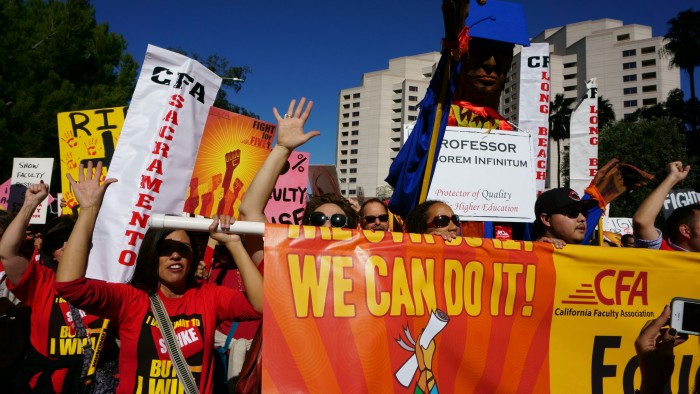 Members of the California Faculty Association disagree with California State University administrators on what a possible state-wide strike might look like, but neither believes it should affect students’ ability to graduate.

CFA President Dr. Jennifer Eagan and CSUN President Dr. Dianne Harrison have both said that a potential five-day faculty strike in April would not impede CSU students from finishing the semester or earning their degrees.

CFA representatives said that their picket lines could cripple activities at the CSU’s 23 campuses. School administrators, however, said that campuses would continue to operate, and most, if not all, of the university’s services will remain available to students.

Other labor unions that represent university employees, like the CSU Employees Union, are not allowed to engage in sympathy strikes, according to documents released by the CSU. This means that unionized, non-faculty employees of the CSU who join faculty picket lines or abandon their posts in explicit support of the CFA are not protected from disciplinary action.

CSU officials expect some class cancellations in the event of a strike, however, they say most classes would continue to meet.

The CFA, however, expect their message to resonate at the picket lines. That’s partly because they would not be acting alone. Numerous organizations, including the Los Angeles County Federation of Labor and the California Democratic Party, are publicly supporting the CFA. Many have committed to strike sanctions and will not cross faculty picket lines. They could potentially deliver busloads of people willing to bolster picket lines.

In an e-mailed statement, CSUN Associate Vice President for Marketing and Communications Jeff Noblitt said that each division at CSUN is preparing contingency plans for a possible strike. His office did not elaborate on the specific nature or progress of those plans.

The CFA have set strike dates tentatively for April 13 through April 19.

The CFA and CSU administrators are currently in the fact-finding phase of negotiations. Both parties are waiting for the release of an independent third party report on the dispute. The two sides are not obligated to follow the recommendations of fact finder Bonnie Castrey. The union is prevented from striking until 10 days after the release of Castrey’s report.

“There could be a settlement any day, in which case the strike would be off,” Neubauer said.

However, according to Eagan, the CFA could vote to extend the strike if the two sides cannot come to an agreement.

The exact nature of a potential faculty strike is difficult to predict and may not be known until the picket lines actually start to form on campus.