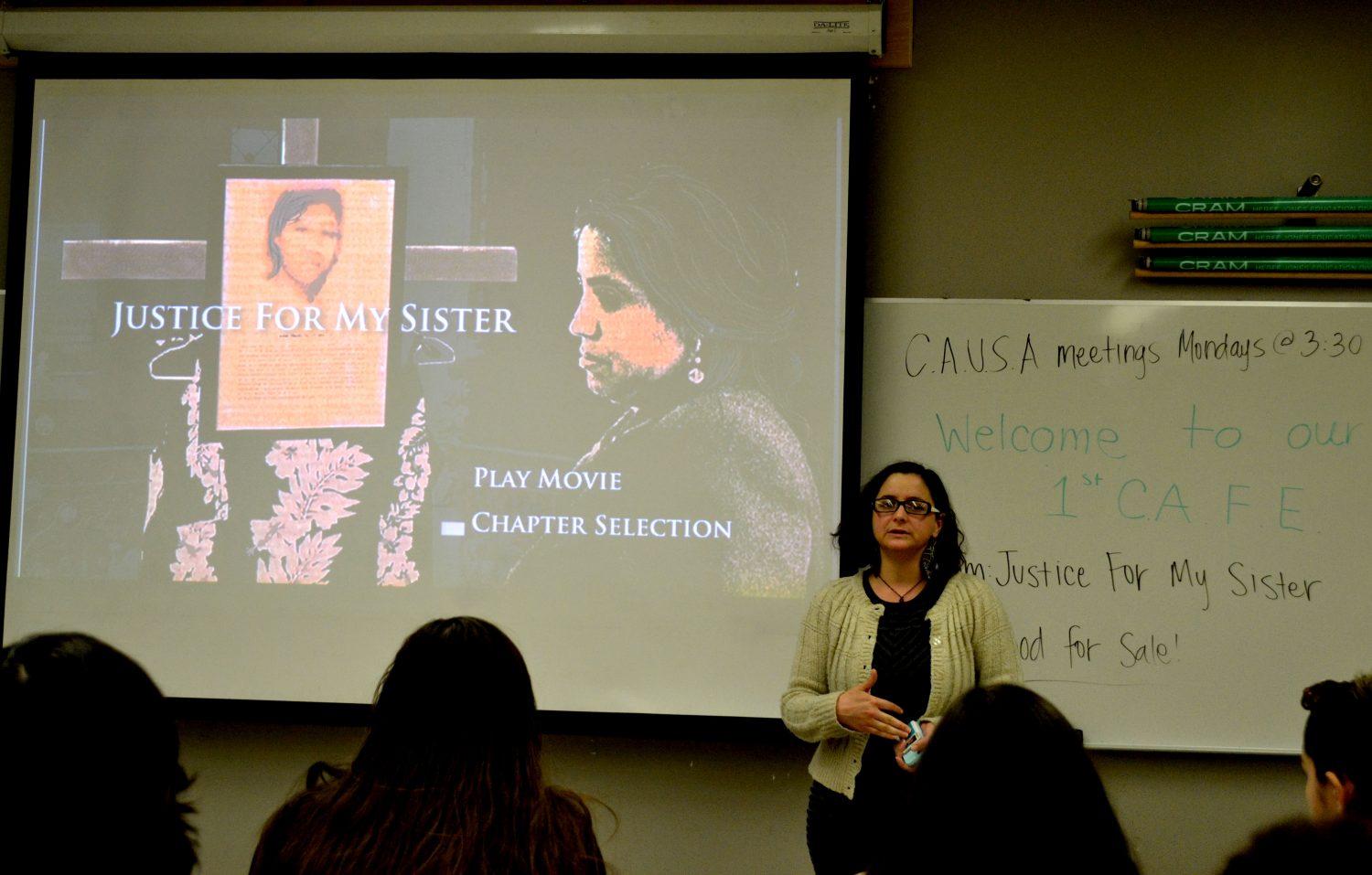 The director of Justice For My Sister, Kimberly Bautista, gives an introduction of her documentary regarding the violence and injustices women in Guatemala face. Photo credit: Natalie Jimenez

The Central American United Student Association (CAUSA) welcomed students to their first Central American Film Experience (CAFÉ) of the semester, on Wednesday night to watch a documentary about the high amount of violence and injustices women in Guatemala face.

The documentary, Justice For My Sister, takes a close look into the three-year journey of Rebecca as she tries to hold her sister’s killer accountable for his actions.

Rebecca’s journey to justice demonstrated how difficult it is for women in Guatemala to be supported after facing any type of violence. She faced various obstacles: the police record of her sister’s case was missing, the trial’s judge was accused of killing his wife, and she had to convince witnesses to forget their fear and testify in court. In the end her perseverance was victorious as the killer was put in jail for 30 years, making it one of the very few cases of domestic violence murder to end in conviction.

“Victim blaming happens in all of these domestic murder cases,” said Kimberly Bautista, the director of the film. “People are constantly looking for justification.”

Bautista mentioned how women are often blamed for the violence they encounter due to “what they are wearing,” “having tattoos,” or simply because “they were asking for it,” which she says falls into the idea of justifying violent crimes and giving men more privilege.

Valeria Hernandez, a psychology major, attended the event and expressed that she left feeling very empowered.

“[The situation in Guatemala] was completely new to me. It is important to know about this and hear what [women] go through,” said Hernandez. “It shows that we [as people] have much more to learn and to do.”

Central American Studies professor and co-adviser of CAUSA, Celia Simonds, said showing these type of films to students can be beneficial when trying to create safe spaces and stronger communities.

“It is important for students to know about these situations,” said Simonds. “Students have to be more involved in what is happening in the world.”

Bautista said she hopes that anyone who watches her documentary will assess their own relationships and the way they treat not only their significant others but people in their communities. In addition, she believes student activism is very important to making a change both locally and globally.

CAUSA’s next event: Open Mic Night at the Chicano House on March 30 at 6 p.m.