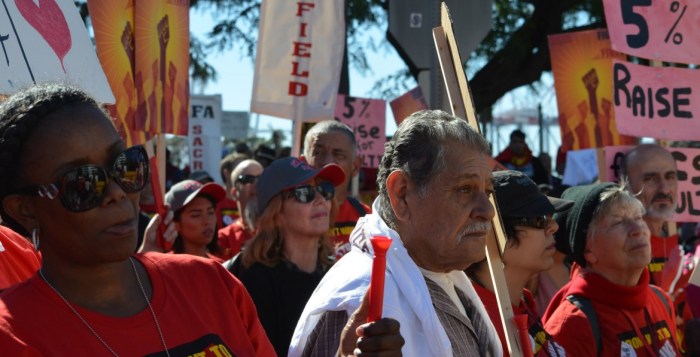 CFA members and supporters listen to speakers at their demonstration in Long Beach on Nov. 17, 2015 (File Photo / The Sundial).

The Sundial asked students what questions were on their mind about the California State University administration and the California Faculty Association.

The information was provided by the CFA and CSU websites.

A: The strike should not interfere with students being able to complete their semester courses and graduate on time, according to President Dianne Harrison.

If students are scheduled to graduate this semester, and pass courses, the strike will not prevent them from graduating. Faculty members will not penalize students for missing classes that have to be canceled, according to the CFA site.

Q: “Why do we pay so much for tuition and none of that money goes to the professor’s who are teaching us? Why don’t they don’t receive any of that money we pay?” — Jeglum.

A: Tuition hasn’t increased since 2013. Proposition 30 was a measure created in 2013 that raised taxes to create revenue to help cover the cost of education, yet soon this will be coming to an end.

Budget transparency at the CSU is not as clear as the CFA would like. In addition to funding new enrollments, we know the CSU plans to spend money on highly paid administrators.

Five percent raise will not raise tuition, according to CFA.

A: Over 94 percent of CFA members said “yes” in strike authorization vote according to a press release from CFA.

A strike is scheduled on all 23 campuses on April 13-15 and April 18-19 if there is no agreement between the parties.

Q: “What if professors don’t go on strike will they be penalized? Will the strike affect our classes?” — Jaycelyn Tuazon, computer science, freshmen.

A: If a strike happens, pay could be docked if faculty participate, according to the CFA site.

If a legal strike were called, it would be unlawful for the administration to attempt to discipline faculty members for participating.

It is a violation of state law to attempt to discipline a faculty member for exercising the right to participate in a lawful job action such as a strike.

The strike should not interfere with students being able to complete their courses and graduate on time.

Q: “What are the dates and details of the strike?” — Natasha Nix- Theater- Sophmore

A: It is a 5-day strike and involves all faculty on campus.

Q: “What is this strike about? Explain more about it. — Gary Barsoni- Undeclared- Freshmen

A: The only issue in dispute is faculty salaries.

The CFA has asked for a 5 percent general salary increase. The total cost of the CFA proposal is $102.3 million.

Faculty members may want to invite students to join them on the picket line. If this is your choice.

Q: “I want to know specifics about the strike and why is it occurring towards finals instead of earlier in the semester?” — Liam Eustace, political science, senior

A: This strike has been planned at a time that will impact students as little as possible, and faculty members will not penalize students for missing classes that have to be cancelled as a result of the strike, according to the CFA member website.

The CSU stated in a press release that the strike should not interfere with the students semester and ability to graduate on time.

Ashley Horton contributed to the reporting of this story.