Apple’s fight for encryption vs. FBI’s plan for safety 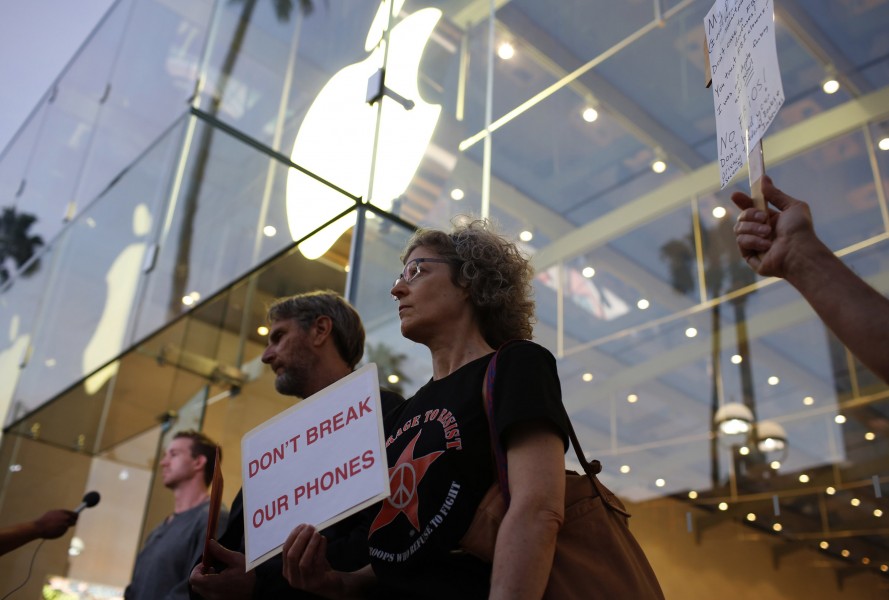 After the December 2015 mass shooting in San Bernardino, the FBI has called upon Apple to change their encryption policies in order to obtain information about the shooters through their cell phones. (Katie Falkenberg/Los Angeles Times/TNS)

Last month, a federal judge ordered Apple to assist law enforcement to break into the iPhone from one of the San Bernardino shooters, Syed Farook. His wife, Tashfeen Maleek, accompanied Farook when they killed 14 people at a health clinic in San Bernardino on December 2nd.

The FBI, according to court papers, asked Apple for assistance in finding “brute force” methods to decrypt – in other words, unlock – Farook’s iPhone 5c. Law enforcement officials believe there is vital information, in the form of text messages and emails, that could possibly help locate more suspects involved in the planning of the shooting.

What does Cook mean?

It’s because of Apple’s stance on encryption.

Encryption is what allows people to safely store information in our smartphones and computers. The information within the device is locked away from anybody who does not have the key. Without the correct passcode, one cannot access information from the device.

Because of encryption, personal data stored in smartphones — such as credit card information, addresses, text messages, pictures, and locations — is naturally assumed to be kept private and, most importantly, safe from those who can possibly utilize this data for the wrong reasons. Make no mistake, encryption is needed in today’s world of online hackers and people who commit identity fraud.

In this case, with an iPhone, someone needs to provide the correct passcode in order to gain access. Apple implemented a specific security feature into the iPhone that auto-erases all data in the phone if the passcode is guessed wrong ten times in succession.

With Farook’s iPhone, the FBI is asking Apple to eliminate this security feature in order to use “brute force” methods – specifically, the FBI is planning on using a supercomputer that would input hundreds of thousands of passcodes in succession – in order to increase their chances of hacking into Farook’s iPhone. Tim Cook says creating “a version of iOS that bypasses [an iPhone’s] security…would undeniably create a backdoor”. This “backdoor” that Cook mentioned in his letter is specific software created to bypass any encrypted iPhone – including Farook’s iPhone 5c.

Dr. Jeff Wiegley, a Computer Science professor at CSUN, says “In other words, no matter how hard the government tries, they cannot legislate unicorns into existence. In this case, the unicorn is the desired “backdoor. There are plenty of encryption algorithms that do not have backdoors possible. Some systems, such as RSA, are based on complex mathematical principles; others are so simple they could be taught to a first grader.”

What the FBI fails to understand is that encryption systems are purposely created around algorithms that cannot be unencrypted or “backdoored”.

And even if Apple were to agree to help unlock the iPhone for the FBI just once, the tech company’s main concern is that the government will use this case as precedent to justify future cases that are not related to national security.

Dr. Wiegley argues that “Even if the FBI wins, Apple won’t be able to write ‘new decryption software’. It’s not possible for almost all encryption systems. The only place people successfully write decryption software is in fictional movies.”

In the government’s defense, the FBI and law enforcement officials can benefit greatly from gathering important names, locations, emails, and texts that are in connection with the San Bernardino shooting. Such information can possibly prevent a future shooting and save hundreds of lives; however, history has shown that the government has misused and mishandled personal information time and time again – most recently with the NSA leaks in 2013.