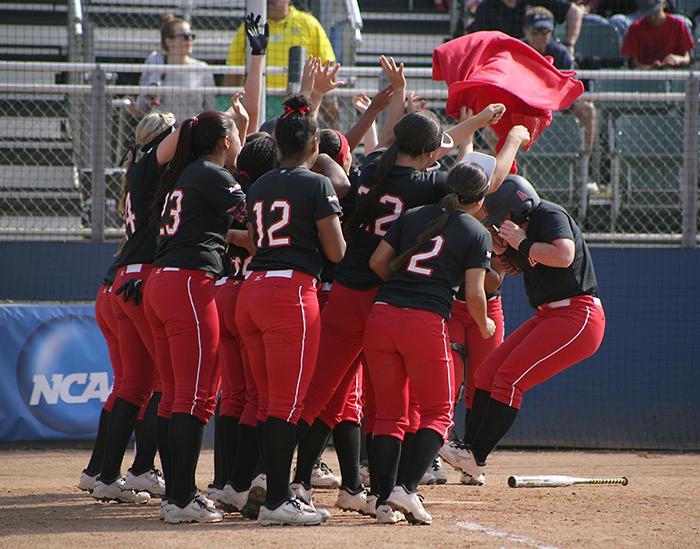 CSUN had a ton to celebrate about, where their strong pitching and hitting resulted in a shortened game against the University of Idaho Bengals. (File Photo / The Sundial)

Timely hitting, solid defense, smart base running, and a no-hitter by the Matadors starting pitcher were all on display in a nearly flawless win. CSUN (14-12) had it all during the 8-0 mercy rule win against the Idaho State Bengals (10-14), in their first game Friday at the Mizzuno Classic tournament.

Freshman pitcher Taylor Troost (3-5) was dominant the entire game, no-hitting a potent Bengals’ offense that came into the game with six of their starters hitting over .300. Troost pitched six innings, giving up zero hits, striking out one, and only walking one hitter. She lowered her season earned run average from 5.36 to 4.75 in the process.

“I threw a couple of no-hitters in high school, very rarely, but never in college [until today],” Troost said. “My rise ball was really effective today.”

The only other base runner on Troost’s record, besides the one walk, came in the fourth inning, when sophomore second baseman Savannah Horvath fielded a ground ball and committed a throwing error to first base. Prior to that point, Troost had retired the first ten Idaho State hitters she faced.

CSUN jumped to a quick 2-0 lead in the bottom of the first inning. A leadoff single by Horvath was followed by junior center fielder Taylor Glover launching her second home run of the season.

Glover had a monster game, going four-for-four with two runs and two RBIs, both coming on the first inning homer. Tying her career high with the four hits, Glover’s team-leading batting average currently sits at a sparkling .483.

“I’m not thinking too much at the plate right now honestly, I’m just trying to stay as calm as possible,” Glover said. “The calmer I am the better I do, I just try to control my breathing.”

In the bottom of the third inning, leading off with a bunt single, Glover advanced to second base on a throwing error. The next hitter junior designated player Katie Hooper singled her in to make the score 3-0

The next batter in the inning, junior catcher Karlie Habitz, proceeded to step to the plate and hit a massive home run, making the score 5-0 in favor of the Matadors. The home run was Habitz’s fifth of the season, the second highest on the team.

“I was just trying to score Bri (pinch runner Sabrina Garcia) with a solid base hit, I’m glad it ended up going a bit further,” Habitz said.

The eighth and final run that secured the mercy win for CSUN came in the bottom of the sixth inning, when Hooper hit a sacrifice fly to left field, scoring Horvath. Hooper finished the game two-for-three with two RBIs.