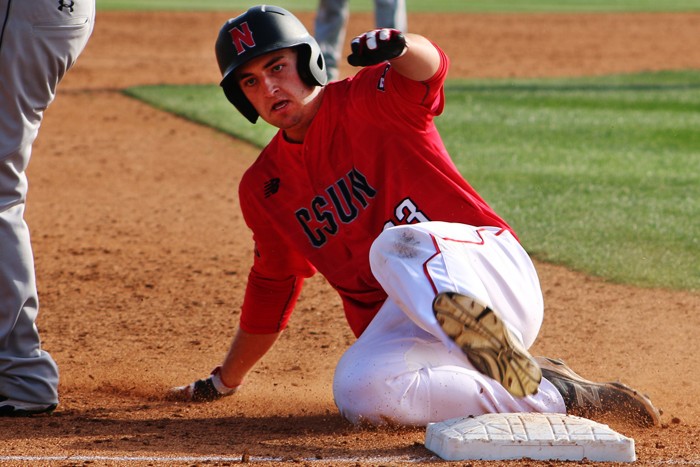 Catcher Dylan Alexander slides into third base, Sunday, February 28, 2016. Alexander went one for one hitting against Northern Colorado. (Josue Aguilar/Sundial)

Facing the University of Portland Pilots in a double header, the Matadors came back in the second game to win 2-1 in 15 innings, but could not do the same in the first losing 6-5.

The game was quiet until the sixth inning when the Matadors scored three runs.

To help secure the lead, CSUN added two more runs in the ninth but Portland rattled sophomore pitcher Andrew Weston allowing them to win 5-2 with a walk-off single.

Despite the loss, key players like O’Neil who holds a 1.91 ERA, senior Branden Berry who went two-for-three with one RBI, and sophomore Albee Weiss who went one-for-four with two RBIs and a double, continue to keep the Matadors in first place in the Big West Conference.

In the second game, the Matadors continued showcasing their strong pitching, but a fatigued offense left 13 men on base.

The only two runs came on a double from sophomore Elias Orona in the fifth and a single by sophomore Justin Toerner in the 15th.

Instead of using multiple relievers in an extra inning game, the Matadors only used senior Rayne Raven who went 7.1 innings, and junior pitcher Samuel Myers who went 7.2 innings.

Each pitcher gave up three hits.

Rayne had eight strikeouts while Myers had seven.