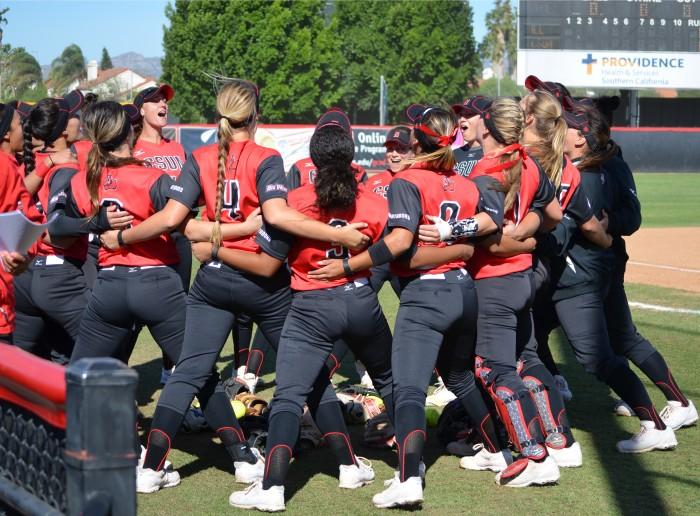 The Matadors get pumped before their double header against the University of Illinois at Urbana-Champaign Fighting Illini on Tuesday, March 22, 2016. (Anthony Martinez/The Sundial)

The Matadors softball team played two games Tuesday against the University of Illinois, the Fighting Illini, winning the first game and losing the second.

In the first game, CSUN (18-13) defeated the University of Illinois (18-9) 4-3. Coming into this game, the Fighting Illini won seven of its previous eight games.

CSUN used one big inning to pace itself to victory, as the team scored all four of its runs in the second inning.

Senior first baseman Ariana Wassmer leadoff the bottom of the second with a single. After freshman designated player Haileigh Gonzalez struck out, redshirt sophomore second baseman Tara Kliebenstein was hit by a pitch, giving the Matadors runners on first and second with one out.

The next hitter, senior third baseman Maylynn Mitchell, laid a perfect bunt along the third base line, loading the bases. Junior left fielder Taylor Nate stepped up to bat next, flying out to left field for the second out, putting the Fighting Illini one out away from ending the inning with no runs allowed.

Sophomore shortstop Savannah Horvath then earned a walk forcing in a run to give CSUN the early 1-0 lead. Kliebenstein scored on the very next pitch as University of Illinois starter Jade Vecvanags threw a wild pitch, making the score 2-0.

After a walk, junior center fielder Taylor Glover again loaded the bases and junior right fielder Katie Hooper recorded her only hit of the day with a single up the middle. The two-RBI hit pushed the score 4-0 in favor of the Matadors.

The Fighting Illini scored one run in the fifth inning and two runs in the sixth, but fell one short, losing 4-3. The CSUN defense supported freshman starting pitcher Taylor Troost (6-5, 3.77 ERA) while she pitched all seven innings.

“I’ve been doing extra cardio either by myself or with another teammate on the side,” Troost said. “I really think that’s made a big difference.”

The series continued Tuesday against the Fighting Illini and had CSUN on the short end of a 4-3 loss. The game required extra innings, as the score was tied 1-1 after the regulation seven.

The University of Illinois scored its first run in the top of the first inning, and held that lead until the bottom of the sixth when CSUN tied the game.

Junior center fielder Taylor Glover stepped to the plate next with a single to right, tying the score at one.

With the score tied after the regulation seven innings were played, the game moved into an international tiebreaker, which gives each team a base-runner on second base to begin their offensive half of the inning.

With one out in the top of the eighth inning, the Fighting Illini made its second run with a fielding error by redshirt sophomore Tara Kliebenstein, making the score 2-1.

For the second time, Taylor Glover stepped up to bat and tied the game with a single to the right side, this time scoring junior left fielder Taylor Nate. Glover now leads the Matadors with 24 RBIs and also in batting average at .491.

“I just try to keep every at-bat the same,” Glover said. “After seeing a pitcher a few times I just like to be confident in knowing there isn’t anything I haven’t seen, and try to be ready.”

The score would remain tied until the tenth inning. With one out, Fighting Illini catcher Emily Brodner stepped up to the plate and hit a two-run home run to left field giving Illinois a 4-2 lead.

CSUN had a quality chance to tie in the bottom half of the tenth but came up just short. With Kliebenstein on second to begin, freshman Mackenzie Babbitt drew a leadoff walk. Nate would then lay down a sacrifice bunt, giving the Matadors the tying runs on second and third base, and only one out.

Sophomore shortstop Savannah Horvath was the next batter, hitting a ground ball to the second baseman who threw home to cut down Kliebenstein at the plate, for the second out.

Glover, already with a three-for-four game with two RBIs, would then be intentionally walked to load the bases.

After an error by the Fighting Illini third baseman allowed Babbitt to score on a Hooper ground ball, the Matadors deficit was cut to only one run at 4-3. Junior Daphne Pofek stepped to the plate with an opportunity to tie, or win the game, but struck out swinging for the final out.

The University of Illinois starting pitcher Breanna Wonderly (6-3) had a career-high ten strike outs on the way to earning her sixth win of the season. She pitched all ten innings, only allowing one earned run on four hits and four walks.

CSUN freshman pitcher Taylor Troost’s record fell to 6-6 with the loss. Troost pitched every inning of the doubleheader for the Matadors, finishing the second game with two earned runs (four total) in the ten innings pitched, allowing four hits and one walk.

Even with the loss, CSUN softball won six of its last eight games overall after starting the season 12-12 prior to this stretch.

“We’re finally starting to see some hard work and things pay off,” Flowers said. “We’re starting to get comfortable and confident, and maybe a little bit more locked in now.”