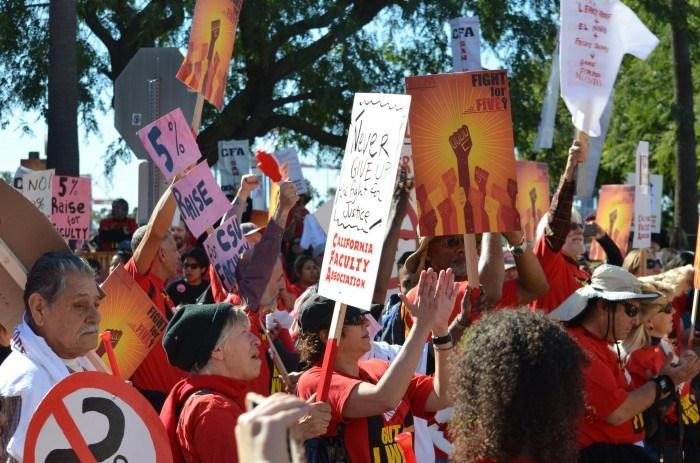 CFA supporters and members chant outside the CSU Board of Trustees office in Long Beach, Calif., on Nov. 17, 2015. File Photo / The Sundial

Factfinder Bonnie Castrey sided with the approval of the California Faculty Associations’s proposal for a salary increase by reallocating funds from other projects.

Castrey’s report concedes the CSU’s budget, in its current form, lacks the funds to fund the entirety of CFA’s proposed compensation package.

She made three suggestions in her report to remedy the situation:

CFA chapter president of the CSUN branch was not surprised to hear her findings.

“Everybody knows we deserve a better rate,” said Nate Thomas, president of the Northridge CFA chapter. “This corroborates that.”

In their dissenting statement, CSU administrators said they agree CSU faculty salaries significantly lag behind those of other professors.

CSU administrators said the university “cannot spend money that it does not have.”

They said withdrawing funds that have been committed to other projects would cause “significant harm to students, faculty and staff and California.”

However, Thomas said the CSU holds a $2 billion reserve while faculty work at multiple institutions and take on odd jobs to pay off their own college loans.

The CSU’s statement supports Castrey’s recommendation that the CFA and CSU work together to enhance state funding.

Picarelli doesn’t view the CSU system she works for as her enemy, but she said the CSU needs to do a better job taking care of faculty.