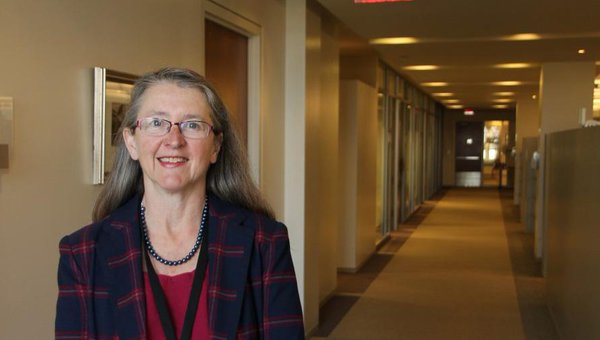 Courtesy of the CSU twitter account. Pamela Thomason was installed as the CSU Title IX Coordinator after a career at UCLA.

Her official job description is to work to “end sex discrimination and sexual violence within the CSU by coordinating with campus officials and system wide specialists to guarantee Title IX policy, programs and awareness campaigns are up-to-date and effective,” according to the chancellor’s office.

Pamela Thomason, 59, was installed as the first-ever system wide Title IX compliance officer at the creation of the position in December 2014, more than 150 years after the CSU system was established. She works at the chancellor’s office in Long Beach, Calif.

In a recent phone interview, Thomason said that she decided to take the opportunity this position provided because it could be a chance to make a major change in the largest and most diverse university system in the U.S.

“I was excited,” Thomason said. “I was thrilled to do it.”

Before her installation in her newest position, Thomason had comprehensive experience with public institutions of higher education in California. Before serving at University of California Los Angeles, Thomason was an attorney for the U.S. Equal Employment Opportunity Commission while practicing law at global firm Gibson, Dunn & Crutcher.

Thomason successfully made an arrangement for each campus to have not only its own Title IX coordinator, but also a sexual assault victim advocate to support victims by providing resources and helping with reporting procedures.

However, at least one complaint against Thomason has been made public and results directly from her handling of student sexual assault allegations involving a professor from her campus Title IX Coordinator position at UCLA.

The complaint indicates that she did not complete a sexual assault investigation within the time frame set forth by the policy outlined for compliance with Title IX investigation conclusions. The professor involved in that case is set to return to UCLA in June to resume employment, despite a student-led protest on UCLA’s campus about the decision to bring him back.

Thomason’s handling of another internal matter at UCLA involving alleged sexual harassment and discrimination of a Ph.D. professor by a superior, suggests that Thomason discouraged the official reporting of the professor’s experiences. Additionally, the purported victim, Dr. Christian Head, claims that right after his interviews with Thomason over the course of two days, he and his colleagues were retaliated against. An official state whistle blower complaint was made in October 2011 regarding what was called “retaliatory actions,” and a lawsuit regarding the matter was settled granting the whistle blower, Dr. Head more than $4 million.

“Privacy protections prevent Pamela Thomason from speaking about any cases and she is bound by confidentiality laws not to discuss any investigations,” CSU Public Affairs Director Toni Molle stated.

No current allegations involving CSUN have been made and Thomason has focused her new job on raising sexual violence awareness and ensuring the provision of a training system for sexual misconduct prevention on all 23 CSU campuses and within the respective campus communities since so much more pressure and awareness have been raised about college sexual assaults being so much more prevalent than previously understood.

“In addition to providing system wide support in our expansion of education and awareness to students, faculty and staff, Pamela works as an ally with those committed to ending sexual violence, including Title IX officers across the system,” said Susan H. Hua, the on-campus Title IX coordinator and director of equity and diversity at CSUN. Hua has been working with Thomason directly.

Additionally, the CSU system is planning to work more on data collection and climate surveys of sexual assaults in the next year.

While the official reports will not be released until October, reporting rates of sexual violence-related incidents appear to have increased since Thomason started serving as system wide Title IX compliance officer, according to Thomason.

However, she stated that every campus needs more effective prevention and higher awareness for absolute safety. Thomason said that students themselves would be one of the most important keys to improving student safety and preventing sexual violence within the CSU campus communities.

“I know the most important thing is activism by students, and it’s a generation that [has] young people talking about their experience and moving the communities,” Thomason said. “The significant key to improve student safety and prevent sexual violence in the CSU campus communities would be students.”

Thomason said that her mission as CSU’s system-wide Title IX compliance officer would be to assure a decrease in sexual misconducts and an increase of safety within campus communities.

She added that it is important to provide attentive help for students who were sexually assaulted because they are more likely to have serious emotional and physical ramifications that could interfere with their ability to finish their education.