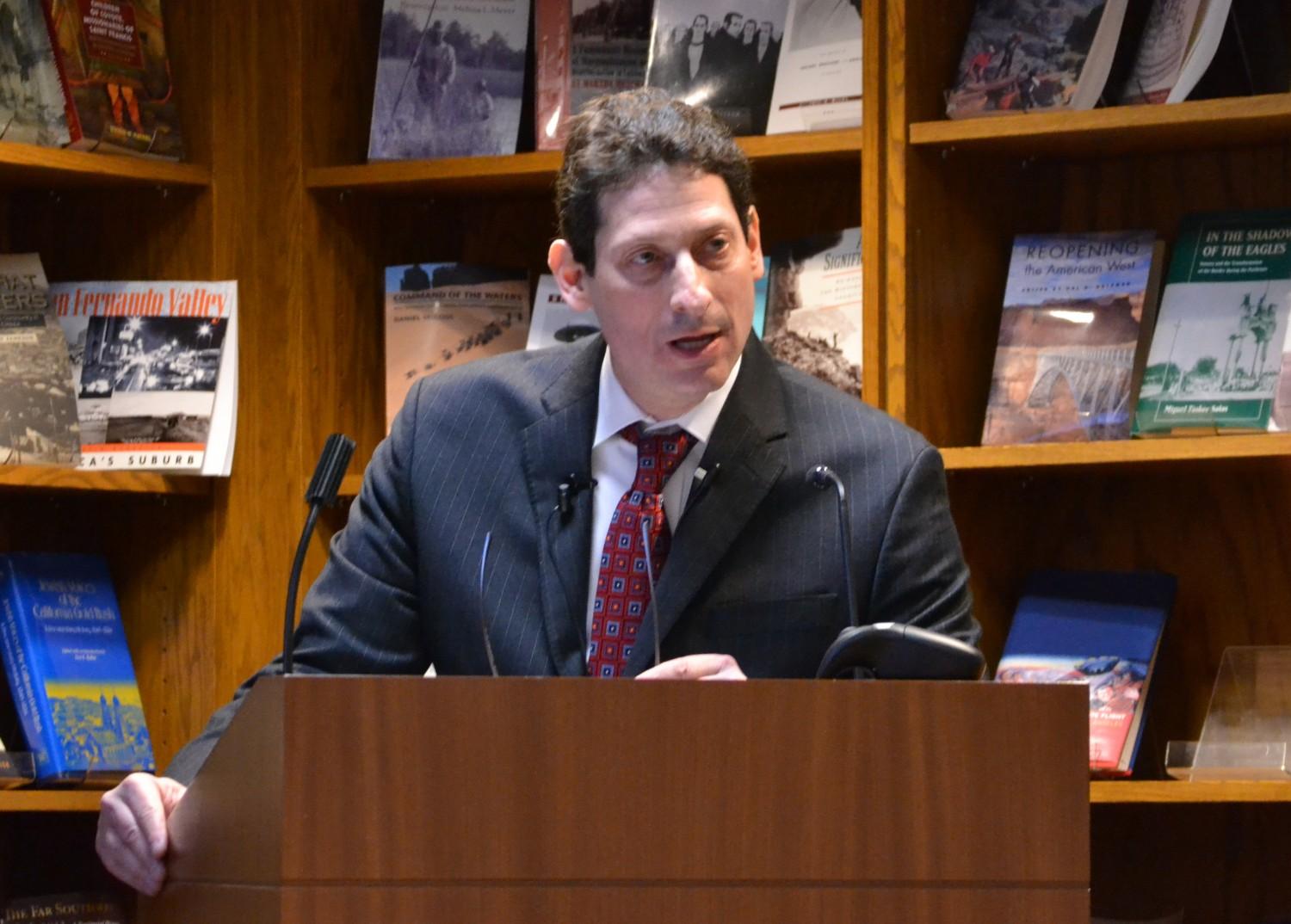 Terror expert Brian Levin discusses the polarized nature of American politics and it's relation to extremist violence at a lecture held on March 28 in the Whitsett room of Sierra Hall entitled Terrorism and Hate: What are hate crimes and who commits them? Photo credit: Eric Licas

Belligerence and xenophobia will not prevent an inevitable attack on U.S. soil by ISIS inspired extremists, according to a presentation from CSU San Bernadino professor Brian Levin.

Levin expressed concern regarding what he called the increasingly “vitriolic” nature of mainstream political debate Monday in Sierra Hall.

He said the anti-immigrant rhetoric endorsed by some conservative circles in the U.S. plays into radical fundamentalists’ assertion that Muslims are incompatible with western society. He added that millions of Muslim-American citizens are worried by the threat of terrorism and could be “critical in our efforts with regard to national security.”

People involved in planning acts of terrorism alter their behavior in ways that might only be noticed or seem suspicious within the communities they associate with, according to Levin. He said alienating those in the best position to identify ISIS coordinated or inspired plots weakens law enforcement’s capacity to prevent a potential attack.

F.B.I. Director James Comey told the New York Times, in 2015, the bureau had over 900 open inquiries related to the Islamic State. Levin said many of these were “lone-wolf” terrorists were inspired, but not directly supported by ISIS.

“I read [ISIS’s] materials every day,” Levin said. “They list their main targets here [in the U.S.], and they will post pictures of landmarks in major cities on their twitter saying “ISIS is here.”

He said the Islamic State has not yet developed a network of agents, bomb makers, safehouses and other logistical support to carry out a direct attack on North America.

However, Levin said ISIS’s resources and sophistication are growing. The extremist group has self-financed over $1 billion dollars to date; they are in the process of developing their own encrypted communication platforms. He warns that a professionally executed attempt is only a matter of time.

Levin’s predictions have recently been proven accurate. Following the Paris attacks, he told an audience at Stockton University that “the west will be hit again.” The very next day, on March 22, ISIS extremists detonated multiple suicide bombs in Brussels.

The evening’s lecture left some attendees concerned about their future security.

“So much of this has to do with what the government is doing; it makes me feel powerless as a citizen,” said Assistant Professor of Political Science, Leigh Bradberry. “The question this raises for me is ‘what can we as individuals do?’”

Levin recommended private citizens stay vigilant and report suspicious activity to authorities. He believes that communities working in concert can identify and prevent terrorist plots before they unfold.

He also denounced suggestions from some presidential candidates to ban Muslims from the US.

According to Levin, ISIS is the most prominent, but not the only terrorist threat to America. The FBI has noted increased activity from armed “patriot” groups like the ranchers who seized control of the Malheur National Wildlife refuge in Oregon.

Junior sociology student, Yaquelin Morales, was startled by Levin’s presentation, but said “terrorism isn’t something that’s going to be on my mind all the time.”

She agrees with Levin in that spread of fear is a primary objective for extremist organizations. Morales said she refuses to succumb to the fear mongering and intimidation of radical fundamental groups, or jingoist political figures.