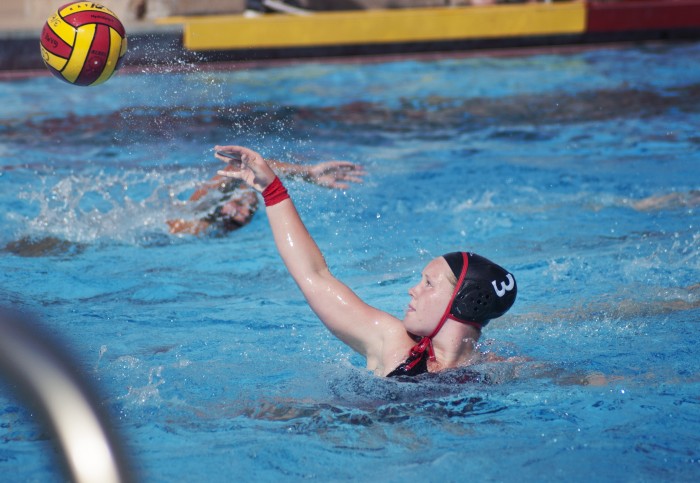 Matador center, Amy Yule (3), tosses the ball to the referee during a game against Brown University on Tuesday, March 29, 2016 at the Matador Pool. The Matadors beat the Bears 10-6.

The Matadors found themselves extending their winning streak to three against Brown on Tuesday at Matador Pool.

After taking a 4-2 lead in the first quarter, the Bears of Brown were out scored 8-2 over the next three. Brown’s Jessica Heilman struck first, and Marisa Koloktronis followed suit after a rejection.

Amy Yule and Madeleine Sanchez answered back for CSUN, only to be overtaken again by goals from Brown’s Olivia Santiago and Carmen Rosas.

The Matadors opened up the third quarter with another score, this time coming from McKenzie Pollei. Paula Abellan Garcia and Sanchez both found the back of the net to raise the goal count for CSUN.

Facing a tough goalie in Niki Van Vugt, who collected 6 saves, 2 assists, and a steal in the contest, Brown was only able to score once in the fourth quarter. Yule and Sanchez, smelling Brown Bear blood in the water, fired two more goals and secured the win.

The Matadors will open up conference play Saturday at UC Irvine, a game slotted for 12 pm.