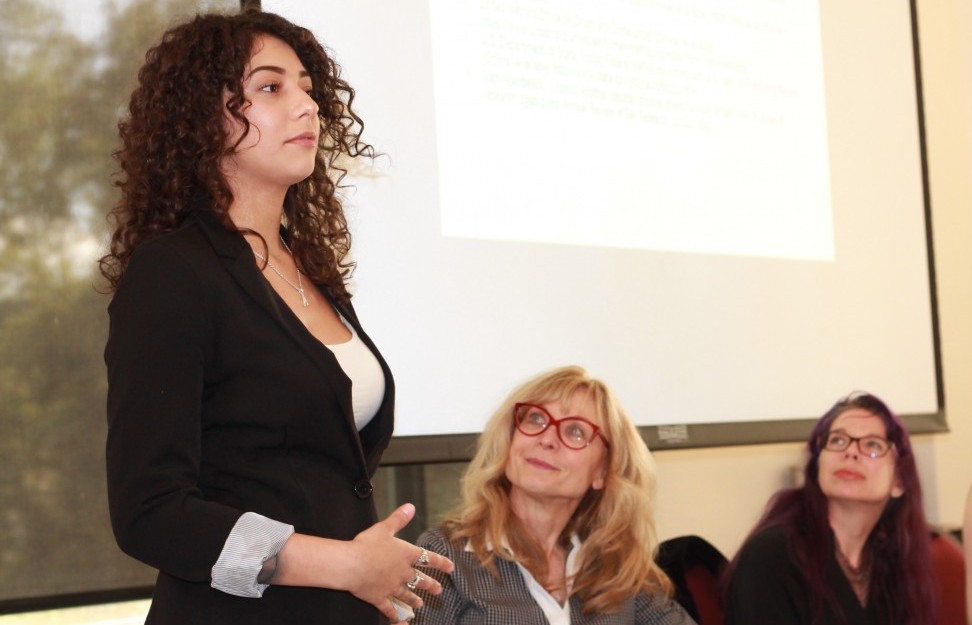 Amina, 21, a professional cam model and escort began her sex work career by simply meeting a girl that was involved in that world and opened her eyes to the possibilities. “Sex work is so one on one, you get to be there and talk to people,"Amina said. "They want someone to care about them and give them that little bit of interest that they don’t get at work or at home. It’s more than a job, but an emotional connection to people.” (Ashley Grant/ The Sundial)

A panel of current and past female sex workers, along with a CSUN sociology professor, held a discussion about the issues surrounding sex work.

Members of the Women’s Research and Resource Center hosted “An Honest Conversation Regarding Sex Work,” Tuesday night at the Thousand Oaks Room in the Universtity Student Union building.

Ela Darling, 29, an adult performer, model and inventor of adult virtual reality content didn’t find happiness in a regular nine to five job, so she went looking for something more.

“I have been doing adult films for, wow, seven years. I used to be a librarian, I got a masters degree when I was twenty-one,” said Darling. “I chose sex work because it was far more empowering and gave me a lot more opportunities than any other jobs outside of academia. I am also the world’s first virtual reality cam girl.”

“It is very important for me to take hold of these topics and really bring it to CSUN because I know, from my own experience, that there is a huge lack of understanding and great divide between what is reality and what exists in the media, what exists in the world,” Valentine said.

More often then not, there is a negative stigma connected to adults that make a living off of engaging in sexual acts, she said.

Sex work often times gets associated with human sex trafficking, but according to Emily Prior, CSUN sociology professor and director of the Center for Positive Sexuality, those two things are completely unrelated.

“Human trafficking is not the same as sex work at all,” Prior said. “People involved in human sex trafficking are forced, abducted and coerced into sex acts that they do not give consent for. They are exploited. Sex workers chose their life styles and careers that help them find themselves and explore their sexuality.”

What people don’t understand is that being a sex worker is not something solely based on sex or even for the money, but is an actual occupation that creates personal bonds.

Each person on the panel opened up to the audience and shared their own life experiences on how they began their journey as a sex worker.

The “Honest Conversation Regarding Sex Work” was the second part to the “Behind Closed Doors” series, which looks at topics that are found to be controversial.

Third part of the series, “Intersectionalities of Sex Work,” will be held on April 19 at the Thousand Oaks Room, USU from 4 p.m. to 6 p.m. The event is free.