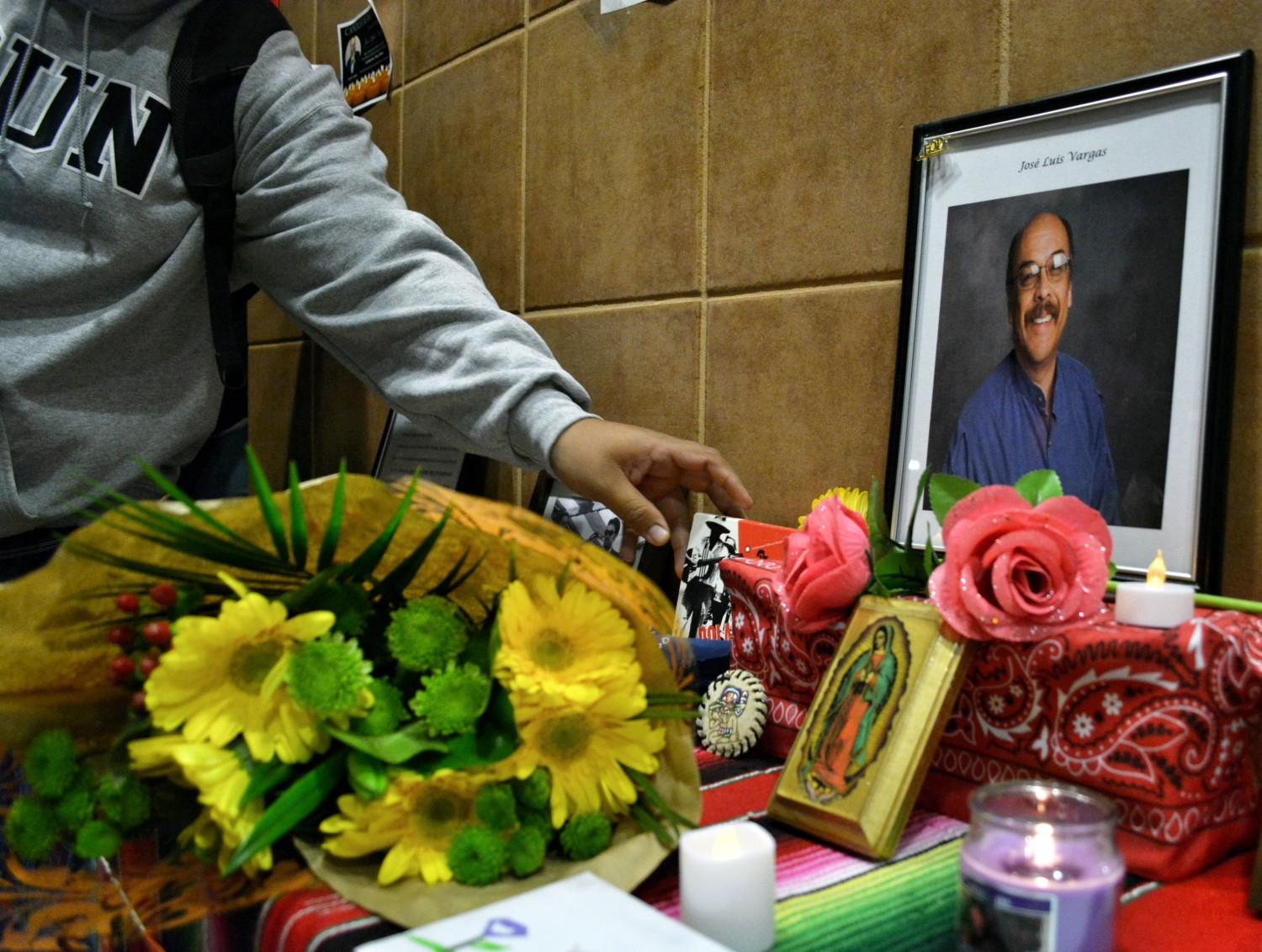 An altar setup at University Hall was left flowers, candles, photos, drawings, bandanas, a smudge stick, a CD of Chicano ballads and other items that reflect memories of José Luis Vargas. Patricia Perdomo / The Sundial

From working with students to get scholarships, and helping with financial aid problems to internships, José Luis Vargas provided heart-to-heart advice to low-income students, according to his colleagues.

“He loved the hell out of this campus. I never understood why until the last couple of weeks,” said Vargas’ son Damian Vargas. “Keep going for your goals, keep fighting for your career because I know he wouldn’t want you guys to give up.”

A candlelight vigil was held for the  Vargas, the director of Educational Opportunity Programs, Wednesday night at the Matador Square.

Over 200 students and staff walked in silence from the Matador Square to the University Hall, where everyone was able to honor the passing of Vargas. The CSUN community chanted Vargas’ favorite saying “Who are we? EOP. You better believe it.”

Students and staff described Vargas as a humble and intelligent person who thought about others before himself. Every decision he made was with the goal of seeing students succeeding.

“He was a wonderful leader, he was able to include everyone in his planning and in his leading,” said Shiva Parsa Associate Director of EOP. “He built EOP at CSUN to what it is today. He is the reason we have one of the biggest and strongest EOP programs in the state of California.”

Since he became the director in 1994 one of his colleagues, Everto Ruiz, remembers when Vargas got his first group of EOP students in 1968.

“Back in the days when CSUN wasn’t a diverse campus he fought day and night to keep this program going,” Ruiz said.

One of the many contributions Vargas did for this community was open the door to first time generation college students who seeked to attend college.

When a number of students thought they wouldn’t be able to go to college because they came from a low-income community, Vargas gave students hope and the opportunity.

He was a man who cared about serving under represented and low-incoming communities who are lacking resources, said Sean James EOP coordinator and advisor.

“He was the one who mentored me to go get my master’s degree and finish my degree. Now I’m working on a doctor’s degree because of him,” James said.

While some students like Luis Reyes, sociology senior, saw him as a “mentor and leader.” Others students saw him as a father figure.

“I told him my story about coming from a low-income community. He told me he was going to take care of me and mentor me,” said Luis Valladares, mechanical engineering junior. “All I can do is try to graduate and continue his legacy”.

Students and staff mourn the death of Vargas by sharing stories and memories on how they meet him and how he became a role model in their lives. Throughout the vigil students and staff had a mutual agreement to keep his legacy going.

“We need to maintain his vision and mission,” Susy Amezcua, a 2015 EOP graduate said. “EOP students need to continue fighting for his legacy because he was the one who believed in us.”