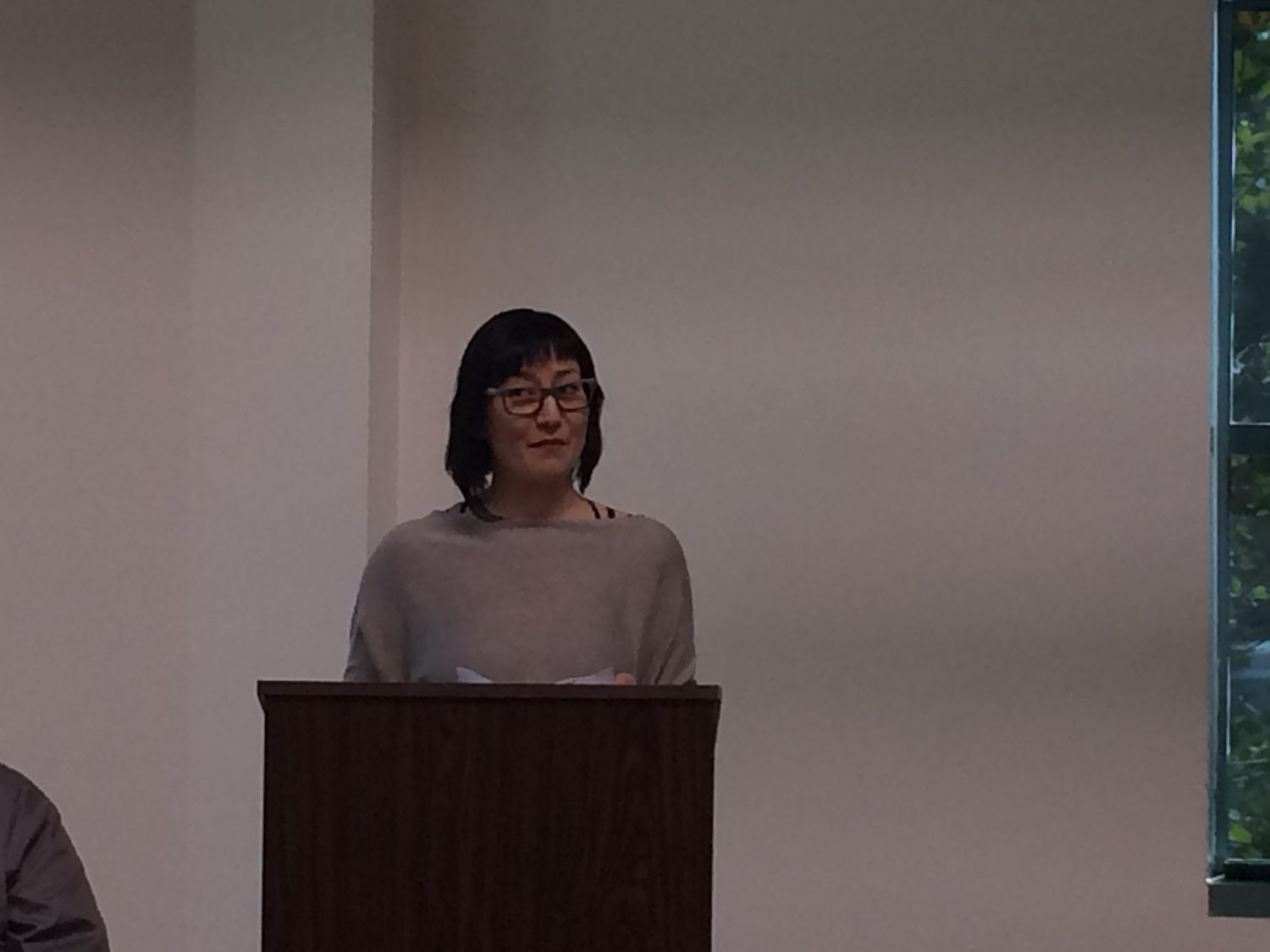 Mari Naomi talks about her feeling foreign to Japanese culture from growing up in the Unites States and working at a Japanese restaurant and not being able to understand her coworkers speaking Japanese. Photo credit: Hannah Brunelli

Comic book artists the Gibbs Sisters and MariNaomi told personal stories about the struggle of giving voices to multi-racial comic book characters during the Women Comics of Color event today in the Flintridge Room of the University Student Union.

The Gibbs sisters, Shawnee and Shawnelle, are known for their writing, producing, and animation for “Ravishing Raspberry,” “Adopted By Aliens,” “Old Ladies Driving,” “Fashion forward,” and “Sule and the Case of the Tiny Sparks.”

They have also contributed to “Step It Up and Dance,” “Project Runway,” “X-Factor,” “Top Chef,” “The Ultimate Fighter,” and Disney’s “Wizards of Waverly Place.”

“Our commitment to telling stories from our experiences is something we’ve been able to do since we were young, and we want to continue to do that through comics,” Shawnee Gibbs said.

The Gibbs Sisters explained to the audience what it was like during their journey to become animation artists as young African American women. The two graduated from San Francisco State as Cinema majors and have been doing animation for 10 years, Shawnelle said.

“It all goes back to visual storytelling which is something we’re passionate about,” Shawnelle said.

The Gibbs Sisters said they grew up writing, and drawing and had a love for telling stories. During the time they were in college, they were told that multi-racial characters weren’t going to be popular or successful in comic books, Shawnee said. Now, people are starting to want to see multi-racial characters they can relate to in comic books, Shawnee said.

“Don’t let any negative stuff get in the way of your creativity; Just do it,” Shawnee said.

The Gibbs Sisters gave advice to the aspiring writers in the audience and said to never give up on what they believe in.

MariNaomi is known for writing and illustrating graphic memoirs such as “Kiss and Tell: A Romantic Resume,” “Ages 0 to 22,” “Dragons Breath and Other True Stories,” “Estrus Comics,” and the upcoming “Turning Japanese.”

MariNaomi explained her struggles growing up as half white, and half Japanese and not being able to see characters that looked like her in comics or other animations.

She read comics she wrote and illustrated from “An Illustrated Guide to Writing People of Color,” which she based off personal experiences from working at a Japanese karaoke bar. The comics showed what she learned about trying to connect with her Japanese culture, even though she felt different because she had grown up in the United States and was not taught to speak Japanese.

MariNaomi wanted to give voices to multi-racial characters in comics but did not want to seem disingenuous, she said. MariNaomi named other writers of color who had given her advice about how to watch out for stereotypes and assumptions about race when writing characters.

MariNaomi said the best advice she received for writing multi-racial characters was to “research real experiences, share your stories with other people of color to get their reactions, and always remember people are people. “

The Gibbs Sisters and MariNaomi told their stories and displayed their comic art for the audience for the first part of the event, and the second part of the event was open for question and answers from the audience. The Gibbs Sisters and MariNaomi answered individual questions about techniques for writing graphic novels, dealing with harsh criticism or discouraging setbacks, and getting started in careers in animation.

“I know that some people think they don’t have stories worth telling, but I think that everybody has a compelling story to tell,” CSUN Africana Studies Professor Treza White said.

The Gibbs Sisters advised students to embrace rejection and keep trying no matter how many times they hear the word “no,” and to keep telling stories to inspire others.