CSUN swept by Fullerton in final two games of series 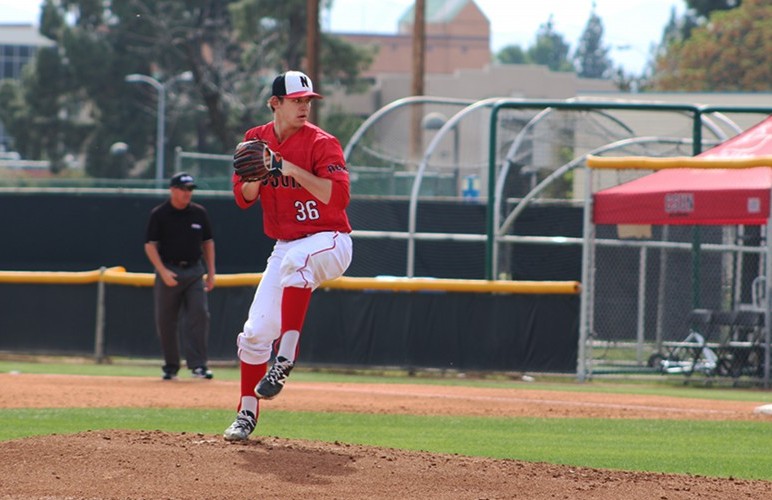 Starting pitcher Andrew Weston winding up for a pitch against Northern Colorado, February 28, 2016. Weston is 1-1 this season as a starter. (Josue Aguilar/Sundial)

The Matadors fell short both Saturday and Sunday in conference games against the Cal State Fullerton Titans. On Saturday, the Titans took the game 2-1, while Sunday 8-5.

There were some bright spots for the Matadors in game two, as junior Fred Smith picked up two hits for the second-straight day and senior Branden Berry continued his tear after driving in his team-leading 24th RBI of the year.

The Matador bullpen had a strong outing, tossing 4.1 shutout innings. The Titans pushed across the winning run in the fourth inning on a two-out hit.

Fullerton cracked the scoreboard first in the second inning against junior starting pitcher Conner O’Neil. With two runners in scoring position and one out, Hank LoForte gave Fullerton the lead with an RBI ground-out to second base. O’Neil limited the damage by striking out Timmy Richards looking, stranding a runner at third in the process.

In the first game of the series on Friday, the two teams combined scored 11 runs. Game two was the exact opposite, only one run was the difference in the loss.

In the fourth inning, the Matadors found a way to spark some hitting as redshirt senior shortstop Yusuke Akitoshi tripled to the right field gap to start the inning and Berry followed with a soft single into center to bring in Akitoshi.

O’Neil shutout the Titans in the third, pitching around a leadoff walk but Fullerton went back on top an inning later.

After the first two batters reached base to start the inning, O’Neil proceeded to strike out back-to-back hitters with the two runners on base.

Fullerton’s Richards came through with a two-out hit that just got by Smith at second base to give the Titans the lead, 2-1.

The Matadors had an opportunity to tie in the fifth inning. Fullerton’s starting pitcher Conner Seabold gave up a single to Carlos Ruiz to start the fifth and he hit two batters with one out to load the bases.

Seabold rallied back and struck out back-to-back hitters to maintain the one-run edge and hold the Matadors to one run.

Senior relief pitcher Angel Rodriguez had a solid outing coming in and kept the Titans off the board for the remainder of the game. He had a quick one-two-three inning, sitting the Titans down in order, in the sixth and pitched around a pair of hits in the seventh inning. Rodriguez went 3.1 innings, striking out three and surrendering three hits.

Along with Rodriguez’s performance, sophomore Joe Ryan tossed 0.2 shutout innings in relief and Viola struck out the only batter he faced.

Unfortunately the CSUN bats couldn’t find a way to rally in the late innings. After stranding three Matadors in the fifth inning, Seabold pitched a shutout sixth and made way for the Fullerton bullpen.

Fullerton reliever John Gavin entered in the seventh and gave up a one-out single to Smith but the next two hitters were unable to reach base. In the eighth and ninth innings, Gavin quieted the Matadors by retiring the side to earn the save.

The Matadors dropped game three, but with much more

After senior Branden Berry was hit by a pitch, sophomore Justin Toerner came to the plate and delivered a 2-run shot early in the first inning, putting the Matadors up 2-0.

An inning later, the Titans’ Josh Vargas evened the score hitting a ball towards second base, scoring a run. Scott Hurst followed with a double and the tying run.

The Titans put together a strong offensive third inning to take advantage of the Matadors’ vulnerability and took control of the game. With two runners on, Tanner Pinkston hit a single to left-field bringing home the go-ahead-run.

The Titan bats proved too much for the Matadors as the runs kept coming in for the Titans with Jerrod Bravo, Chris Hudgins, and Scott Hurst all recording RBI’s bring the Fullerton lead to 7-2.

The Matador bats did not stay quiet though. Junior Dylan Alexander careened a homer off the left field scoreboard in the fifth inning. Providing some type of offensive spark, this home-run trend continued later in the inning after redshirt senior Nolan Flashman blasted a ball over the center field wall cutting the Titan lead down to two runs.

In the bottom of the seventh, the offense picked up again for the Titans as Dalton Blaser doubled and brought home the eighth and final run of the game for the Big West foes.

However, CSUN did not keel over and give up. They battled back in the ninth after back-to-back singles from sophomore Albee Weiss and sophomore Nolan Bumstead bringing Alexander back up to the plate.

Unfortunately, the Titans were able to collect themselves and get out of the late-game jam on a 4-6-3 double play, ending the Matador rally and the game in Fullerton’s favor.

The Matadors next game is at UCLA on Tuesday night at 6 p.m.

Additional reporting in this story was done by Peter Felsch