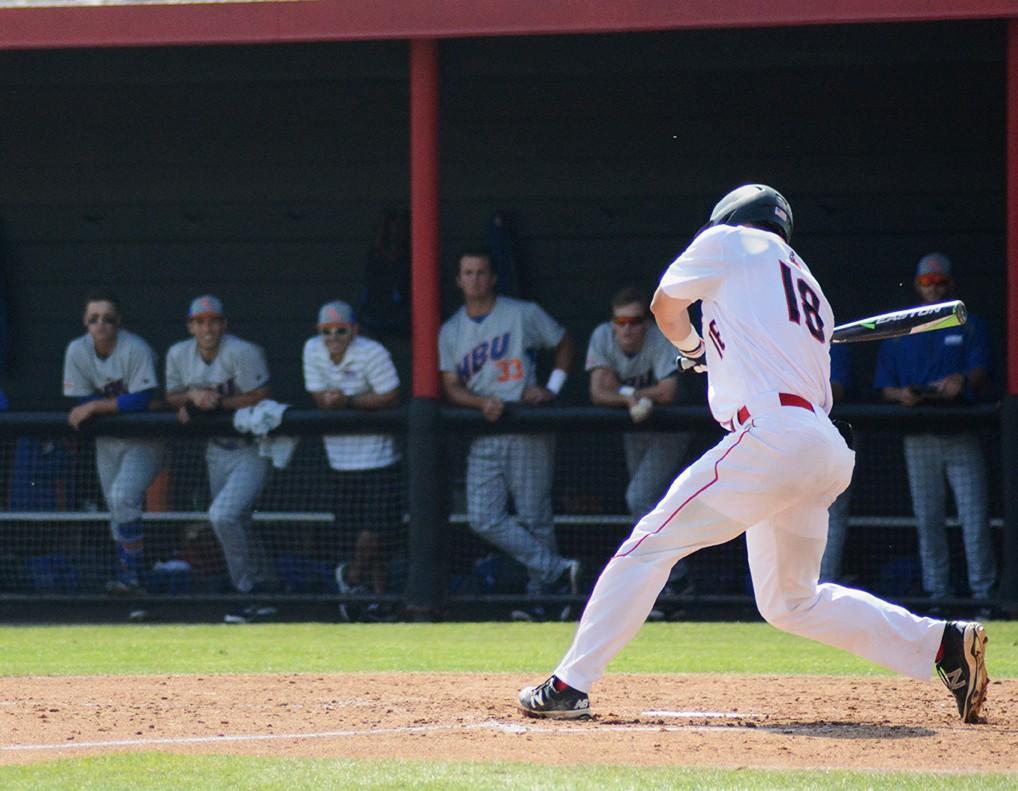 Opening up Big West play, the Matadors (20-5) faced off against the Cal. State Fullerton Titans (13-11) in the first of a three game series at Goodwin Field on Friday night.

In a back-and-forth affair, the Matadors looked poised to give the perennial powerhouse, Fullerton Titans, a run for their money.

Entering the game these two Big West rivals were ranked among the top-20 programs in the nation in ERA, Fullerton 2.36 and CSUN 2.76, respectively.

With sophomore pitcher Kenny Rosenberg on the mound, the Matadors looked good early. It wasn’t until Fullerton’s Josh Vargas recorded an RBI ground-out that the Titans scored the game’s first run.

In the third inning, Rosenberg once again found himself in a predicament when Titans’ shortstop Timmy Richards stole second base and was able to reach third on an in-field throwing error from the Matadors.

However, the Matador defense held strong and was able to pick off the runner on the next at bat to get out of the inning unscathed.

Heading into the top of the fifth inning, the Matadors were still looking for their first run of the game.

Giving up a walk to the first batter of the inning, junior Fred Smith hit a center-field single that put runners on first and third base. After another walk from redshirt senior Yusuke Akitoshi to load the bases, Brandon Berry followed suit with a walk of his own, too.

Sophomore Justin Toerner drove in the Matadors’ second run of the game with a sacrifice fly, making the score 2-1 CSUN.

A veteran Titans team was not fazed and scored in the top of the sixth to even the score at two. Berry recorded the final out of the inning with a miraculous over-the-shoulder catch.

In the bottom of the seventh, Titans’ designated hitter Niko Pacheco blasted a one-run homer off of Rosenberg, making the score 3-2 Fullerton. The sophomore’s pitch count had reached well into the 90s and after this final blow, the Matadors’ coaching staff relieved him of his duties.

In a productive inning, Matadors’ Albee Weiss hit a ball into left field that evened the game at three, heading into the bottom of the eighth.

With the bases loaded in the bottom of the eighth, Titans’ Josh Vargas hit a triple down the right field line clearing the bases and scoring on an error by the Matadors. The Titans took the lead, 7-3.

Still trying to put up a fight, the Matadors showed some resiliency and scored one more run on a wild pitch.

The Titans ended up winning the game, 7-4.

The Matadors continue their series with Cal State Fullerton on Saturday night at 6 p.m.