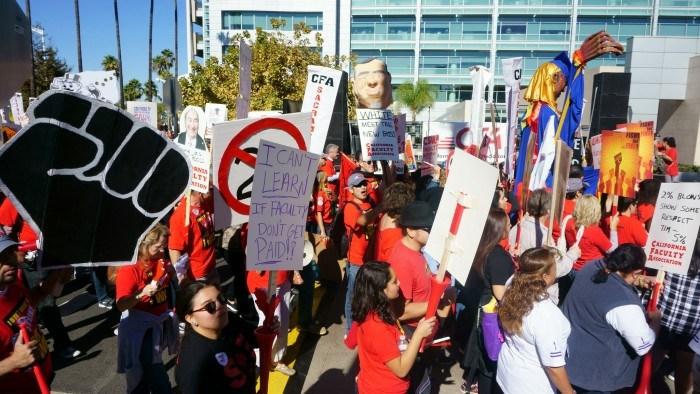 CFA demonstrators rally outside the entrance of the CSU Board of Trustees offices in Long Beach. Nov. 17, 2015. File Photo / The Sundial

With days left until the potential California Faculty Association strike across all 23 California State University campuses, strike talk has slowly made its way into classrooms.

When the CFA announced their potential strike dates, which they will pursue if they are unable to settle salary negotiations with the CSU, several CSU presidents issued similar statements stating, “Classroom time cannot and should not be used by faculty to discuss issues related to the strike…”

Yet, according to the CFA, strike talk is allowed with certain guidelines.

With the various information students have been receiving about the strike, it can be confusing to know what can and can’t be said or done.

To offer some clarity, the Sundial has compiled a list of what can be done according to the two sides and the law.

In 1940, the American Association of University Professors Statement on Academic Freedom states, “Teachers are entitled to freedom in the classroom in discussing their subject, but they should be careful not to introduce into their teaching controversial matter which has no relation to their subject.”
Yet in 1970, the AAUP amended this statement explaining, “Controversy is often at the heart of instruction; good teaching is often served by referring to contemporary controversies even if only to stimulate student interest and debate.” This amendment was made because their intentions were to avoid teachers introducing material that has no relation to the subject, not to ban controversial language in classrooms.
In 1979, the Higher Education Employer-Employee Relations Act was passed in order to cover employer-employee labor relations for both the CSU and UC systems. It provides various employee and union rights, including the right to collective bargaining and fact finding.

According to the CSU website, class time may only be used by faculty members to inform students about class schedule and assignment changes if affected by the strike.
Faculty members “cannot and should not use classroom time to discuss other issues related to the strike, unless such a discussion is directly relevant to the content of the course,” according to the CSU.
Even if the strike discussion is relevant to class material, faculty are not allowed to state their own opinions or try to convince students to support or oppose the strike, according to the CSU.
Students cannot be offered incentives or be forced to join strike activities or support either the CSU or CFA position, according to the CSU.
If faculty are striking, they cannot “block or obstruct student access to campus, campus services or the classroom,” according to an update from CSUN President Dianne Harrison.
In an email from CSUN Vice President William Watkins, if professors do not provide students with “clear guidance about their courses,” students should speak to their professors or department chair.
The CSU stated, “this is not an ‘academic freedom’ issue, but a matter of using state resources — the classroom — for a purpose that is not lawfully authorized for state use.”

Under HEERA, it is legal for CSU faculty to strike when the “statutory bargaining process” is complete, or in simpler terms, when the fact-finding report becomes public.
According to the CFA, in addition to CFA members’ constitutional rights to free speech and freedom of assembly, HEERA and the Collective Bargaining Agreement protect and allow CFA members to conduct union activities, including strike preparation.
According to the Academic Senate of the California State University (ASCSU), the CSU’s statement regarding what faculty are allowed to discuss in classrooms is not their decision. Faculty teachers are the only ones allowed to decide what material is relevant to their class, not the campus president or the chancellor. This coincides with other current faculty-made decisions regarding educational methods or disciplinary expectations.
The CFA stated that faculty is expected to follow the tradition of academic freedom and talk about relevant topics in their classes. Yet topics that are relevant to the classroom can include “the strike, the situation of faculty, student fees and debt, and the CSU as a public agency.”
The CFA stated that administration interference with CFA member rights to “engage in activity and discussion in and outside of the classroom,” would violate academic freedom and the first amendment.
Faculty may invite students to join the picket line but must emphasize that joining is completely voluntary, according to the CFA website.
CFA members are legally allowed to refrain from teaching and other work related activities while striking. It would be a violation of the state law if a faculty member is fired or disciplined for exercising their right to “participate in a lawful job action such as a strike.”

Natalie Jimenez contributed to this story.