What to do; Queer in your Career 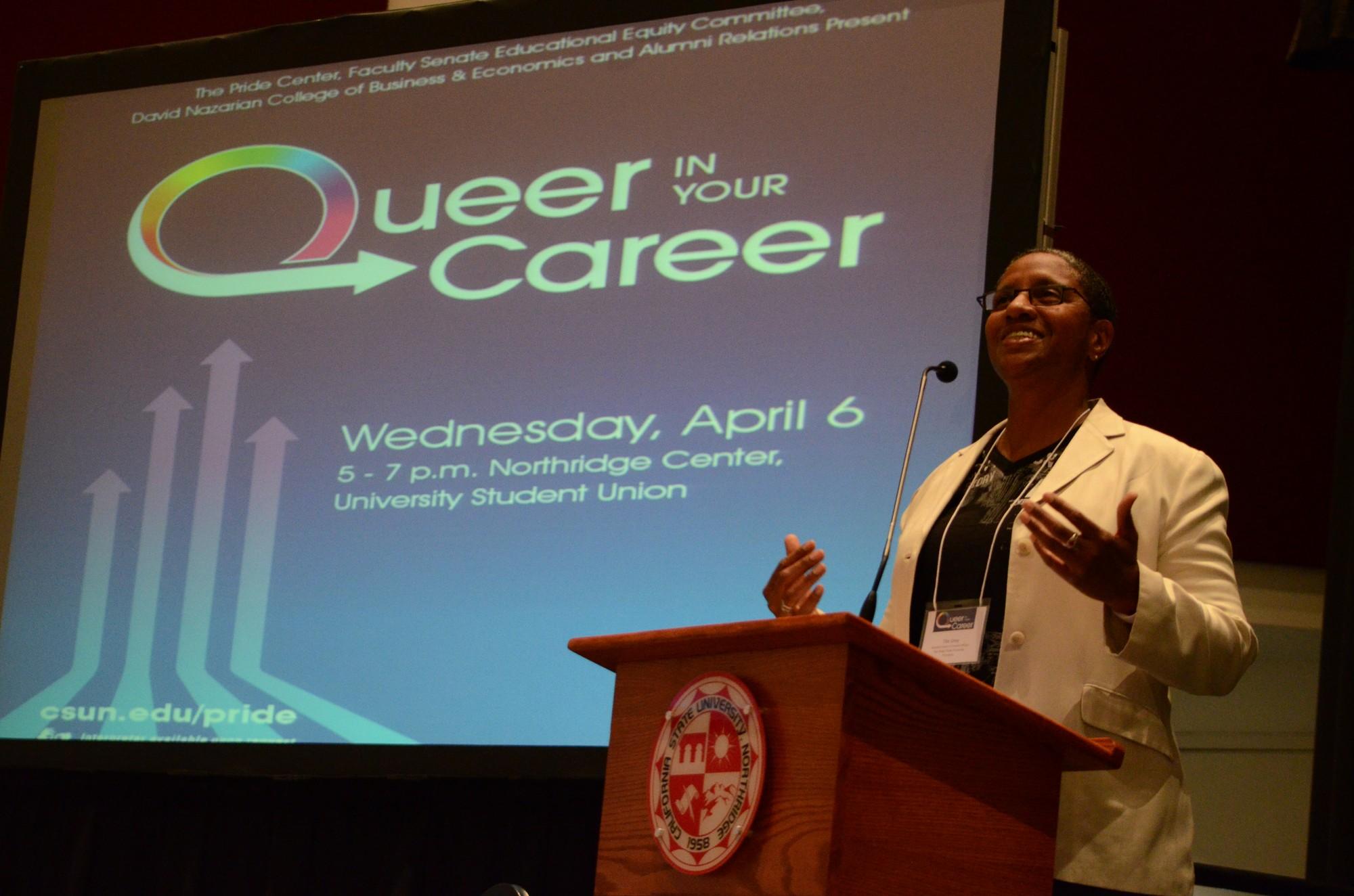 Tita Gray, assistant dean of Student Affairs at San Diego State University, gives her keynote speech at the first ever, “Queer in your Career,” event that took place Wednesday, April 6 at the Northridge Center in the University Student Union. Photo credit: Erik Luna

Brian DeWitt is no stranger to discrimination for being gay. It’s a constant factor in his life ever since he was growing up in the small town of Sierra Vista, Arizona.

DeWitt was one of many students sitting at the Northridge Center April 6 as the Pride Center, Faculty Senate Educational Equity Committee, David Nazarian College of Business & Economics, and Alumni Relations presented, “Queer in your Career,” event.

The event, which is the first of its kind at CSUN, aimed to bring professionals of various careers together to guide and help students who may have questions about coming out in their respective careers.

DeWitt, an accounting major at CSUN, said that he struggled with discrimination early on.

“In my high school, I was starting an LGBTQ club and I faced a lot of discrimination from the faculty there. They were running me through a lot of hoops and run-arounds — even with small things like paperwork,” DeWitt said. “We’re so lucky to be living in a city where there is an example of every kind of walk of life.”

It’s these examples of discrimination that this event is trying to prevent, said Sarina Loeb, the coordinator of the Pride Center at CSUN.

“[Students] can and should be able to be their authentic selves,” Loeb said. “When I’ve had jobs outside of higher education, being out was definitely a concern. ‘Should I come out to my co-workers? Is it going to be safe? Are they going to treat me differently? Are they going to ostracize me?’ I think that’s a fear a lot of people face.”

Tita Gray, who holds a doctorate in education and is the assistant dean of Student Affairs at San Diego State University, gave the keynote speech at the event. Gray discussed her own story about discrimination about succeeding in business as a gay, black woman.

“I always built a network of people around me that saw the good in who I was as a person, and that saw my skills and expertise as the most important part of me — not who I chose to love,” Gray said in her keynote speech.

During her keynote speech, Gray opened up to the audience and told a small story about her life as a disk jockey and how it led her to success. She mentioned that she had been up for a job, but was passed over on account of her sexual preference.

“If somebody doesn’t want you some place, it’s probably the best thing for you,” Gray said in her speech on the ordeal.

The event culminated with a panel discussion led by Accounting and Information Systems Department Chair Paul Lazarony. The panel consisted of five professionals from various careers, and not just those directly connected to the LGBTQ community.

After the discussion, Lazarony opened up the floor for questions for the panelists. Students took turns asking questions to further understand and glean any information and advice from the professionals.

“The LGBTQ community is so diverse, so it was important that we had a diverse panel that would be well represented, and I think we did a good job,” Lazarony said. “Even I learned things tonight. The choice of being out at work, and having that discussion with the students and all of the out professionals, I really hope it changes students’ lives and lets them know that there are resources out there to help them.”