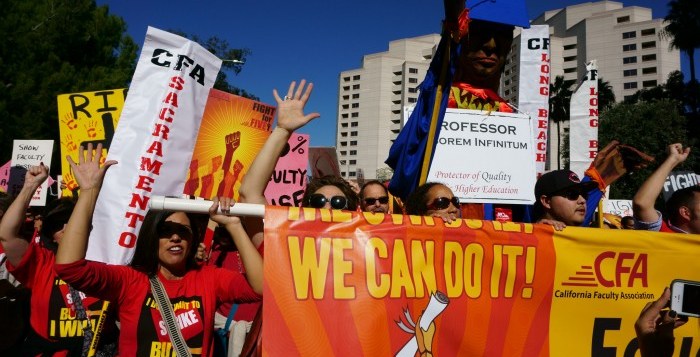 The California Faculty Association and its supporters march through downtown Long Beach on Nov. 17, 2015 for better wages. File Photo / The Sundial

The potential upcoming strike, that California Faculty the Association was preparing across all 23 California State University Campuses, has been called off.

After prolonged salary negotiations, the CFA and CSU have come to a tentative agreement.

The agreement will increase salaries over three years and will extend the current faculty contract by one year, June 30, 2018.

According to Chancellor Timothy White during a phone call press conference, he explained the previous numbers that the CSU stated the salary increase would cost the school system were no longer valid. The two parties have agreed to extend the salary increases to be distributed over a period of three years rather than all at once.

The tentative agreement states the following on the CFA website:

The agreement also will increase the minimum promotion salary increase from 7.5 percent to 9 percent for tenure-line faculty and associate professors.

The agreement also now formed a “Lecturer Range Elevation,” which will now have a group that will work to study issues of salary increases being linked to step increases. This group will work to find a solution March 1, 2017.