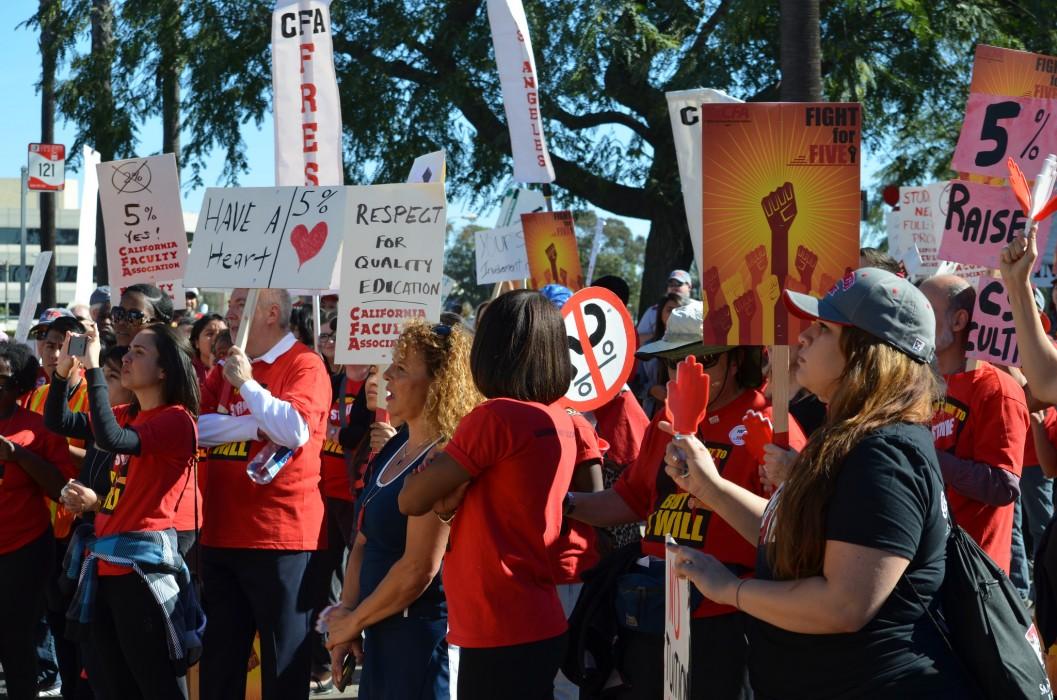 The California Faculty Association and its supporters march through downtown Long Beach on Nov. 17, 2015 for better wages. File Photo / The Sundial

The five-day strike threatening to cancel classes across the CSU’s 23 campuses will not happen after a tentative agreement between the California Faculty Association and the CSU Board of Trustees was reached today.

The new faculty salary plan awaits ratification by the CFA. It distributes a 10.5 percent general salary increase [GSI] and a 2.65 percent Service Salary Increase [SSI] over a three-year period.

Professors, lecturers, coaches, counselors, and librarians will receive a five-percent pay increase on June 30, 2016 and another 2 percent raise on July 1, 2016.

The tentative salary agreement is between the largest public university system in the U.S. and 26,000 CFA members. The system serves over 460,000 students, according to the CSU site.

According to CSU Chancellor Timothy P. White, the salary increase will be derived from funds over the years and won’t raise student tuition.

A 3.5 percent pay increase is scheduled for July of 2017, and the SSI will be distributed to eligible faculty in 2018.

“This agreement will not make faculty rich, or solve all of their financial problems,” said CFA President Jen Eagan.

However, she said the new deal demonstrates that the CSU does value their instructors. She added that it will make a positive impact on faculty in “survival mode.”

During the conference, White said the CSU was “under-resourced and living within our means.”

Documents from the CSU had stated the university “could not spend money it didn’t have.”

The deal is possible partially because it spaces out the salary increase over time, rather than drawing from resources assigned to current projects. Increases in state funding also accounted for 6 percent of money that will fund faculty raises this year.

White and CFA president Jen Eagan both praised the proposed solution during a press conference. They said faculty and administrators will need to work together to procure more funding in the future.

“This dispute, which is now behind us, is an unfortunate victim of a core problem in California,” White said. “The California State [Universities] are underfunded relative to the needs for educated populace.”

White called the agreement a team effort. He thanked Eagan and the bargaining team responsible for forging a deal that will keep campuses open and reduce hardship for faculty.

“The nature [of this debate] changed when the Chancellor got involved,” said Eagan. She called the averted crisis “the largest strike that didn’t actually happen.”