Bull Ring finalists move to next round 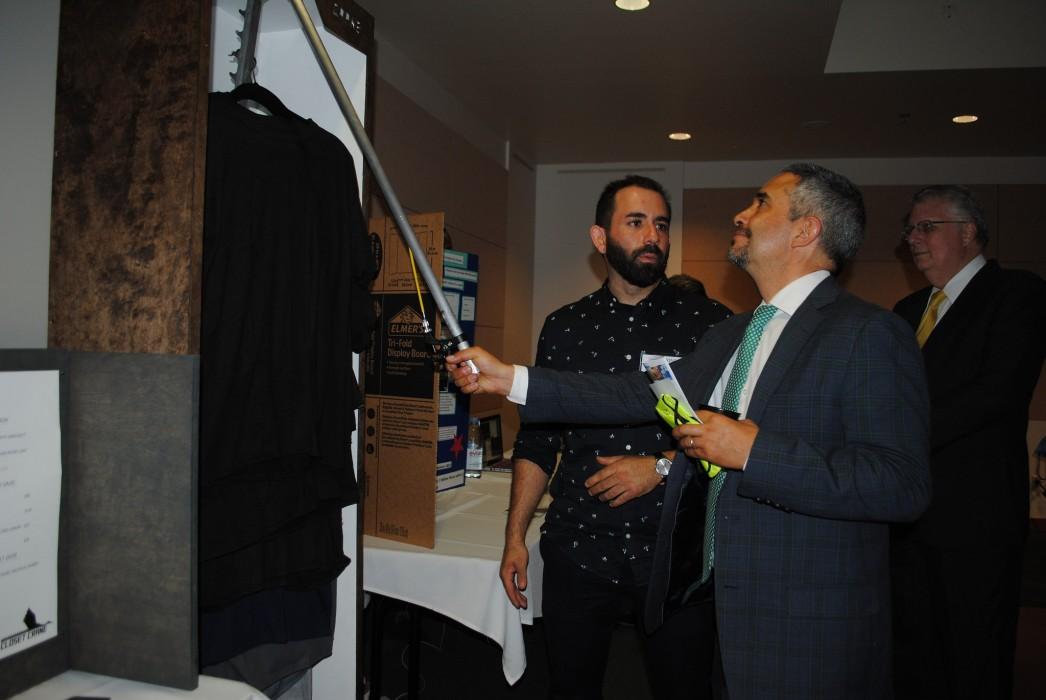 Eager entrepreneurial Matadors gathered in the Ferman Presentation Room on Thursday to put their ventures to the test and put others to rest.

The David Nazarian College of Business and Economics, as well as the LACI@CSUN, hosted the inaugural Bull Ring New Venture Competition Semi-Finals. The competition served as an opportunity for CSUN students to receive funding for their business ideas.

First prize for the competition is $25,000, while second place is $10,000 and third place is $5,000. The competitors who place in the top three also get a three-month membership to CSUN’s incubator, LACI@CSUN.

The twenty semi-finalists, which were whittled down from the original 58, were able to showcase their ideas to a panel of “distinguished judges,” according to the Bull Ring pamphlet.

The judges were comprised of CSUN alumni and business and new venture professionals, like CSUN alumnus Max Aram.

Aram is the founder and CEO of Pick My Solar, a CleanTech Web startup, that connects homeowners with solar installers through an online bidding form, according to the Bull Ring pamphlet.

Muris Mulalic, the founder of mygympals, had the idea for this when his friends helped him get into shape, according to Mulalic. With mygympals, users can use the app to meet up with other people looking to exercise in their area.

The app, which is still being developed, would be free to users. There are already 6,500 users in Southern California, according to Mulalic.

Mulalic said the the idea for mygympals was, “To take a chunk out of obesity.”

Another venture that was being presented was an app called Guzzle. This app is the, “first ride sharing service that’s not for profit,” according to Michele Muriyan, one of the creators of the app.

With this app, users will be able to coordinate rides with fellow concert-goers based on their location and available seats in the vehicle.

This ride sharing app is similar to Uber and Lyft, except that the ride sharing is on a “peer-to-peer,” basis, according to Muriyan.

Muriyan said that winning the prize money would, “Bring the app to life.”

Guzzle is the first to market a social concert application, according to Muriyan.

Stina Helland and Ibrahim Al-Sultan came up with an idea to help international students find roommates easily. Their website and app is called Zucasa.

“The app uses the same algorithm as dating websites to match roommates around the world,” according to the Bull Ring pamphlet.

According to Al-Sultan, there are over one million international students in America. When Al-Sultan came to America to go to school, he had to stay in a hotel for over six weeks because finding a roommate was such a chore.

The purpose of the app is to, “match roommates on a more personal level,” according to Helland. The questions are based on user preferences.

This app aims to create, “the best housing situations possible,” according to Al-Sultan. Although the app is aimed at International students, it is for anyone who needs a roommate, according to Helland.

CTHRU is an app that is “marketing on steroids,” according to Narek Zaribian, one of the founders of the app.

The aim of this application is to provide a “bridge between stationary print and digital.”

Although the top five winners weren’t immediately decided, the first place winner was decided, by one vote.

The winner of the Bull Ring Semi-Finals was a group called Vibe Probiotic. The winning group was comprised of Abed Rahman, Erika Elizalde, Katie Teevin, Jonathan Lopez and Mackenzie Bacalzo.

“Vibe provides more strains and live cultures than any other competitor product,” according to the pamphlet. While their company is not completely off the ground, their pre-order page just went live yesterday, according to Rahman.

Probiotics are bacteria in the stomach that control the immune system, according to Vibe’s pamphlet.

“Our Vibe Probiotic Drink contains 50 billion live cultures upon consumption with 13 unique probiotic strains, prebiotics, and the best assortment of Electrolytes,” according to the pamphlet.

According to Rahman, Vibe’s Probiotic drink helps with the immune system, the digestive track, and even increases mental health and stability.

Rahman said winning this competition was “a burden off my shoulders.”

Their products include Vibe Water, powder sticks and Vibe chews.

“Buy a bottle, save a life,” Rahman said.