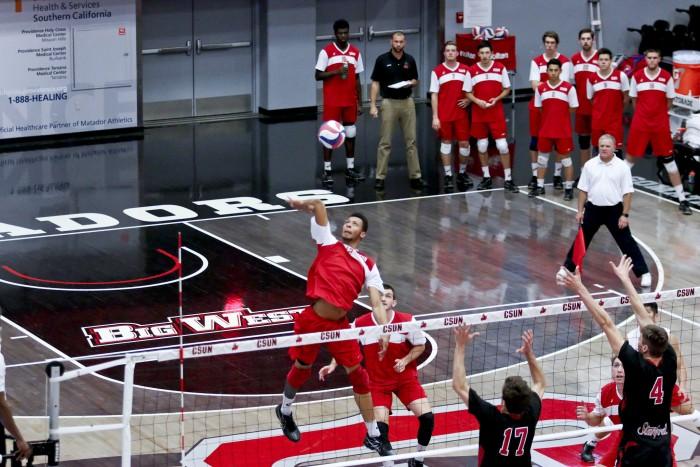 The CSUN men’s volleyball team may have struggled this season, but the team ended it on a high note with a win against the University of California San Diego Tritons on Saturday night.

In a quick and easy game, the Matadors beat the Tritons in three straight sets.

CSUN not only outscored San Diego, but they also had more kills with 39 total.

Of those 39 kills, 11 were by freshman outside hitter Dimitar Kalchev, who also got two blocks in the game. He finished second on the team in kills with 301 this season.

First in kills (314) for the season was junior outside hitter Jakub Ciesla who got six kills this game.

The first set was back and forth with the score staying close until the end when the Matadors got two kills to help take the set 25-23.

The score remained close in the beginning of the second set but the Matadors stifled the Tritons toward the end and San Diego was unable to block, losing 25-18.

Set three (25-17) differed, with the Tritons struggling to keep up during the whole set, scoring the last point right before the Matadors won the set.

A big contributor to the win was freshman setter Sam Porter, who got 31 assists and two blocks in the game. He finished first in assists with 1,015.

This win ended a five game losing streak for the Matadors, finishing the season 14-15 overall and 7-15 in conference play.