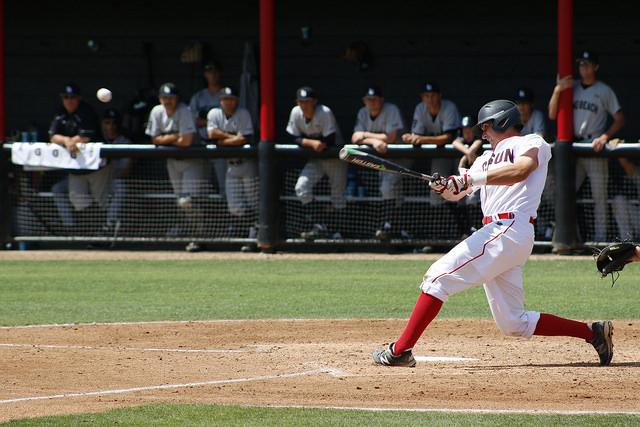 FILE PHOTO - Sophomore infielder Nolan Bumstead get a hit against Long Beach State. Bumstead finished with one hit and two RBIs in 6-3 loss against the Long Beach State 49ers on Sunday, April 10, 2016. (Josue Aguilar / The Sundial)

After rain delays altered the weekend schedule, the CSUN baseball team avoided getting swept by the Long Beach State Dirtbags, winning 4-2 on Monday.

Unlike the pervious two games of the series, the Dirtbags did not jump out to an early lead against CSUN.

Striking out two of the first three batters in the top of the first inning, sophomore starting pitcher Andrew Weston looked determined to shut down the Dirtbags offense once and for all.

The stellar defense continued in the second inning as Weston allowed only one runner to get on base, holding Long Beach scoreless going into the bottom of the second.

Reaching base on a throwing error by the Dirtbags, sophomore Nolan Bumstead was able to get on base. An error that would prove costly later on in the inning when junior Fred Smith doubled to left center scoring Bumstead and redshirt senior Nolan Flashman.

Heading into the third inning, the Matadors were up 2-0.

In the bottom of the fourth inning, the Matadors looked ready to put the Dirtbags down for the count.

Starting with the first at-bat, Flashman doubled to left field to begin the inning and sophomore Elias Orona followed with a sacrifice bunt allowing Flashman to advance to third. Smith then flied out to center filed which scored Flashman, making the score 3-0 CSUN entering 5th inning.

After leaving four runners on base through the seventh inning Long Beach State looked gasped.

With an offensive spark in the Top of the eighth inning, Long Beach was able to get runners on base, but as they did in the previous innings left runners on base and were only able to score one run, bringing the score 3-1 Matadors.

Continuing his offensive prowess Flashman stepped to the plate in the bottom of the eighth and delivered a homer into left field that put the Matadors up 4-1.

Happy to get out of the eighth only surrendering one run, Long Beach gave their last offensive push to overcome the deficit.

However, they were only able to score one more run before succumbing to the Matadors 4-2.