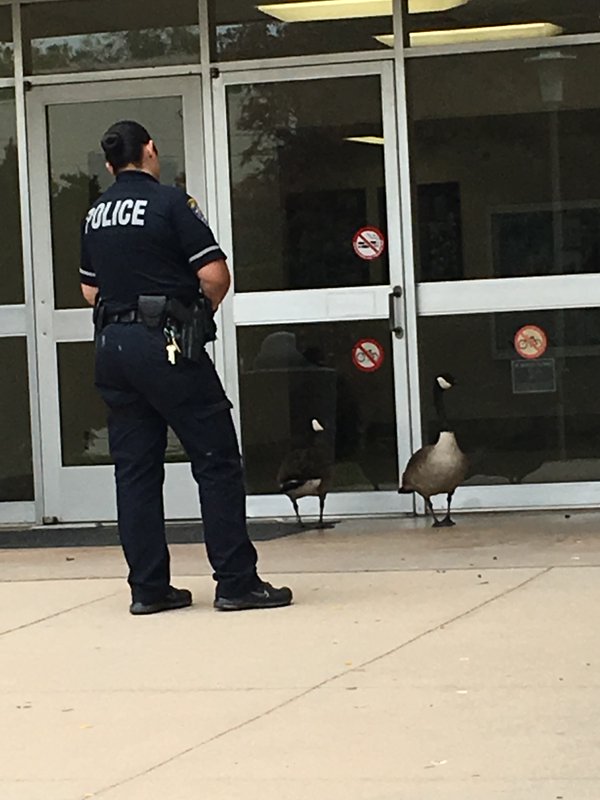 The geese were spotted on April 7. Photo courtesy of Julian Lozos, CSUN assistant professor of geophysics.

Beware of geese running wild, attacking and patrolling the doorway of the Live Oak Hall.

The infamous CSUN squirrels have new competitors for spare French fries and chips this month. But you may not want to share your food with these long-beaked waddlers.

There have been reports of the geese bombarding people who are trying to make their way around the building.

Julian Lozos, assistant professor of geophysics, has witnessed the geese charging people and honking at passerby.

“I saw one smack really hard into the window,” Lozos said.

Another faculty member told Lozos they saw geese diving at people and hissing at those that walk, or run, past.

Lozos said the geese seem to be patrolling the doorway.

“They weren’t going to let me open the door. I hissed back and they let me in,” Lozos said.

He has seen geese poop on the floor of the department building, although he is not sure whether it was tracked in by shoes or the geese themselves.

On April 7, a police officer was overseeing geese to make sure no attacks took place.

The geese stayed over the weekend and may not be leaving for a while.

Lozos said he has heard reports of a nest being on campus, and according to Pest Control Inc., the Migratory Bird Treaty Act protects most all of the birds that nest in and around areas. The site said you cannot remove a nest if geese are attempting to raise a family.

According to Lozos, students are taunting the geese, but he warns that they will chase you.

So far there are no reports of bites.

CSUN attack geese update: apparently they have a nest next to our building, so they actually cannot legally be relocated. Great…

The Sundial went on a hunt Tuesday afternoon and didn’t spot any birds. But we did find a friendly cat near the walkway towards Live Oak Hall.

.@seismogenic update on the geese. Didn’t find any geese, but here’s a cat by the library you should go find! pic.twitter.com/CkC3FJBX2j

Sad to say there have been no geese discovered. But hey, the kitty is still out near the bookstore @dailysundial pic.twitter.com/LAMRJVHHxE