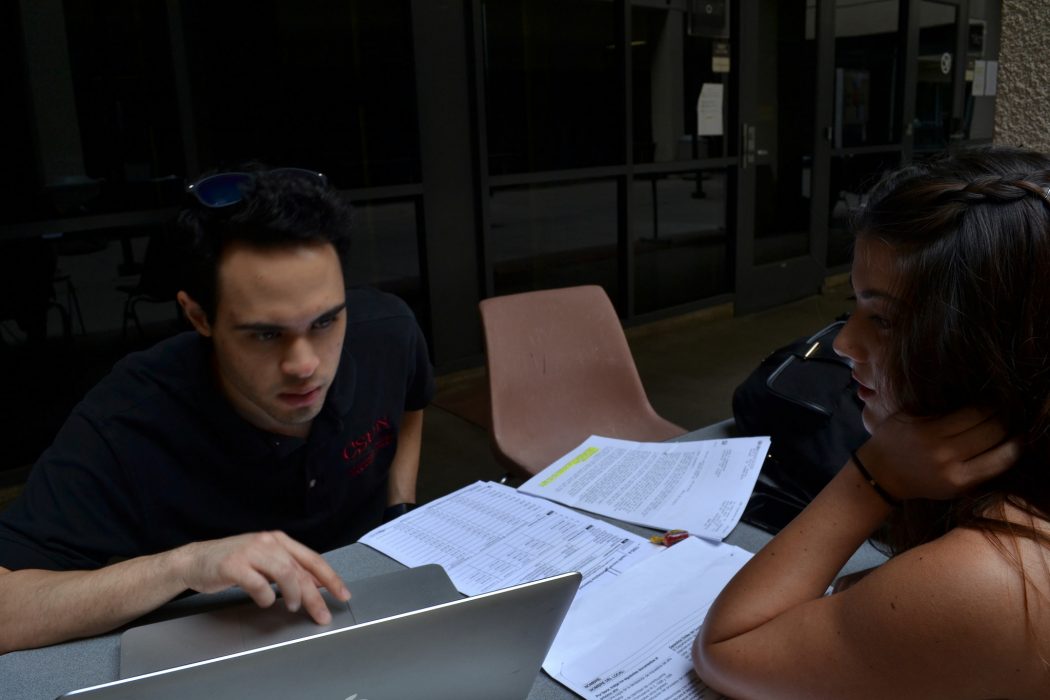 Ladan Teherani went to professionals to have her taxes filed last year, but only earned $10 from her refund after paying for their services. This time, she drove from Calabasas to Northridge to get free help from IRS-licensed tax preparers working with the Bookstein Institute’s Volunteer Income Tax Assistance program. Without a reservation, and less than a week before the filing deadline, Teherani had to wait about an hour outside Juniper Hall. After going over forms with volunteers for another hour, the annual chore was complete.

“It was worth it,” Teherani said. The recent Pepperdine graduate’s refund came out to about $1000 this year.

The VITA program’s staff and volunteers help people that make less than $54,000 a year get the maximum value of their refunds while cutting out costs, confusion, and headaches. VITA will charge nothing for the services it provides at CSUN and other locations throughout the North East Valley until the program closes for the season on April 15.

VITA Operations Supervisor Ara Kiledjian said that the refunds VITA has processed average between $300 and $400. However, VITA staff note that college students can apply for a variety of special tax credits designed to offset the costs of education by filing a 1098-T form.

Volunteer and accounting senior Kana Carpenter said that one taxpayer she was filing documents for almost had to pay a substantial amount of money to the government. She was a student that had received scholarships and didn’t think she was eligible for education-related tax credits. Carpenter told her she should “still check [the 1098-T] … and she wound up getting money back.”

In addition, many students qualify as low-income workers and are eligible for what VITA clinic faculty member Professor Lucy Nalbandian called one of the most significant federal anti-poverty measures: the earned income tax credit.

People who earned less than $10,000 in income do not need to submit tax forms, but they still have plenty of reasons to have their taxes prepared by VITA, according to Kiledjian. He said people can earn a refund even if they’re not required to file. They also avoid the risk of punishment if they are mistaken about their income status.

“I’ve never had a client actually owe money to the government,” Carpenter said.

If a client does need to pay the IRS, they can find help managing their penalties at the Bookstein Low-Income Taxpayer Clinic, just across the hall from VITA’s office.

“We can get you on an installment agreement,” Kiledjian said. He added that “sometimes there is doubt as to whether or not you’re liable [for a penalty].”

The hour-long sessions are also valuable as a learning opportunity for the VITA program’s clients and the accounting students that comprise its volunteers. The software they use replicates the look of the physical versions of tax forms. VITA Marketing and Recruitment Supervisor Dillon Karaan said that, as a result, taxpayers that file with them have a chance to become familiar with tax documents and get to see the process from start to finish.

Staff at the VITA program expect to serve nearly 10 times as many clients this year than they did in 2015.

Tax preparers are working hard to keep pace with demand.

She and other volunteers said that, as the filing deadline draws near, they have seen a surge of taxpayers coming to them for assistance. Valley residents can still take advantage of the VITA’s services if they make an appointment, or drop in at one of the program’s locations.

Deadline to file taxes is April 18.