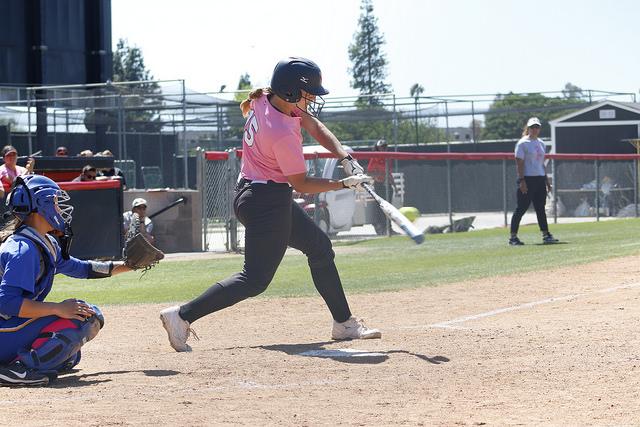 Junior catcher Karlie Habitz gets a hit against UCSB. Habitz finished the game with one hit and two RBI's. Photo credit: Josue Aguilar

After a sluggish second outing in the series, the CSUN softball team were able to snatch the series victory over the UC Santa Barbara Gauchos, with a 6-2 victory on Sunday afternoon.

However, the Matadors got off to an inauspicious start, allowing two runs to the Gauchos in the second inning, with the second run coming off of a fielding error by sophomore shortstop Savannah Horvath.

In spite of the shaky defensive effort, CSUN bounced back immediately.

With their backs against the wall early, the CSUN bats responded in the form of junior outfielder Taylor Glover and freshman utility player Mackenzie Babbit, as both players reached based with one out in the third inning.

Horvath then stepped up to the plate—representing the go-ahead run. During Horvath’s at-bat, Babbit put more pressure on UC Santa Barbara senior starting pitcher, Ashley Ludlow, by stealing second base.

Leading 3-1 in the count, Horvath made Ludlow and the Gauchos pay by hitting a home run to left field, putting the Matadors up 3-2.

The home increased Horvath’s RBI total to a team-best six for the series.

With a lead in hand, CSUN junior starting pitcher Daphne Pofek settled down, closing the game with four scoreless innings and allowing only four hits.

And as Pofek stymied the UC Santa Barbara offensive attack, CSUN’s offense regained the form they demonstrated in the first game of the series—when they also scored six runs—tacking on three more runs in the fifth inning, stretching their lead to four runs, putting the game out of reach.

Pofek’s win marked her second of the series, in which she allowed only two runs over the course of 14 innings, and won both games.

After another victory, CSUN’s record stands at 25-19 and 5-4 in conference play.

Furthermore, the Mataodrs claimed sole possession of second place in the Big West. Granted, the second place team and last place team in the conference are separated by only two games in the loss column.

CSUN will hit the road to play a three-game weekend series on April 23 and 24 against the Cal Poly Mustangs.