Senior infielder strives off, on field 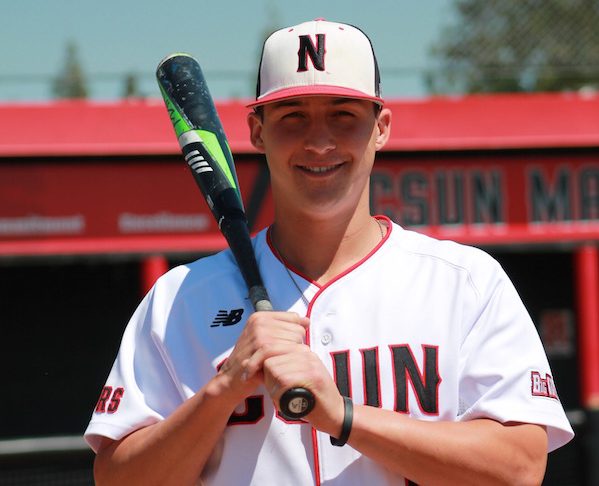 More than halfway through the 2016 season, senior Branden Berry is tied for the team lead in home runs with six. Photo credit: Ashley Grant

Senior infielder Branden Berry, 22, is among the top producers for the CSUN baseball team, but he’s more than just his stats.

Born and raised in San Diego, Berry has been in love with the game since he first started playing tee-ball when he was five.

Now in his last year playing college baseball, Berry said he matured a lot throughout his college career and wants to make sure that he instills good work ethic on his younger teammates.

“The biggest thing I wanted to focus on this year was having fun,” he said. “I’ve got nothing to lose; It’s just about enjoying the game that I love and trying to empower the guys around me to be the best that they can be.”

A transfer from the University of Washington, Berry graduated with an undergraduate degree in communications with a minor in political science and diversity. With one more year of athletic eligibility, Berry enrolled in the Recreation and Tourism Management graduate program at CSUN.

As of April 18 leads the team with 28 RBIs and on base percentage with .465. He also is tied for first in home runs and doubles with six each. His .331 batting average is second highest on the team.

Despite his hot start to the season, Berry doesn’t want to give his numbers much attention.

“I obviously want to blow my stats out of the water,” he said. “But I don’t want to quantify it, because if you hit that mark, then what? There’s no point in capping yourself; I just want to be on it at every at bat.”

Matadors’ head coach Greg Moore acknowledges the numbers Berry puts on the board, but he praises Berry’s consistency both on and off the field.

“He brings experience and a big heart; that’s a rare mix,” Moore said. “A lot of times when a guy plays for a long time, they get selfish or they get jaded. Branden has gone the other way. He walked onto this campus looked around and said ‘How can I help other guys get better?’”

CSUN senior third baseman Will Colantono, who has known Berry since high school, is also trying to make sure the younger players succeed once he leaves, and he thinks Berry is exemplary.

“He sets a great example off the field,” he said. “Simply by walking around campus wearing a polo, he’s showing the younger guys that you have to go to class looking presentable and show that you want to be there and learn.”

However Berry has also had to go through growing pains for him to be able to lead the team by example.

“I’ve gone through experiences and life challenges over the years to know what to do and what not to do off the field,” he said. “Hopefully I’ve been a good influence on the younger guys on our team as well as a good role model.”

Hailed as a leader, Berry prefers to credit those who have led him.

“Coach Moore does a great job of just preaching to us, ‘We only get today. There is no tomorrow. If you’re worrying about tomorrows game, you’re not going to be the best you can be right now,’” he said. “As players, we have such great role models. I want to be a little bit of everyone on our coaching staff.”

Berry doesn’t know what the future holds for him but he hopes the Matadors can keep winning and prolong the season.

“I don’t think you ever underestimate someone who has an impressive mind,” Moore said.