A way of life: Inside the mind of a marijuana smoker 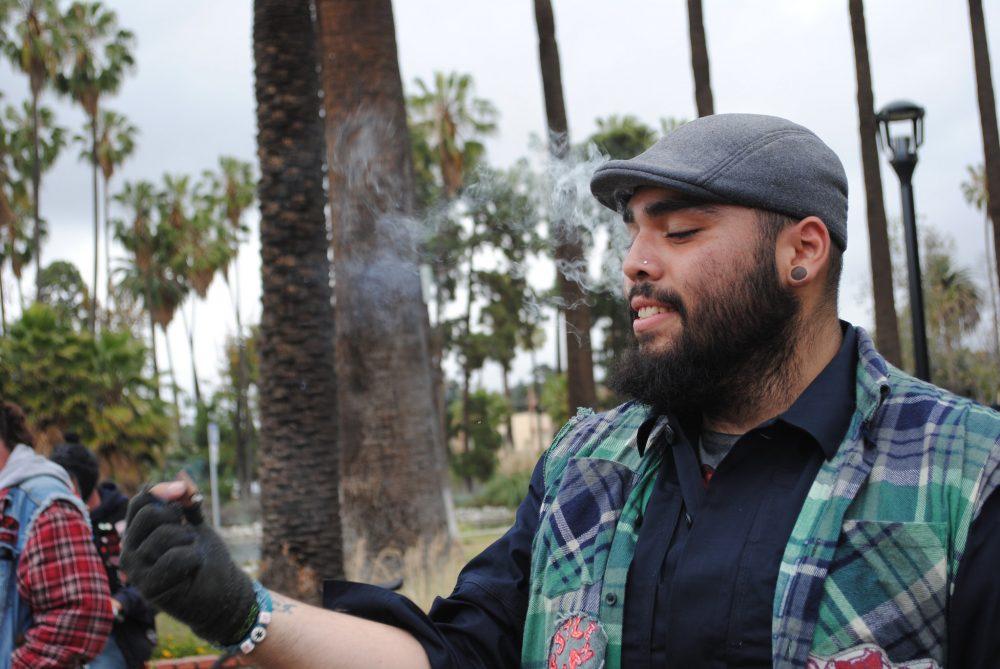 Members of the cycling club Mom Ridaz from the original chapter out of Echo Park, before a ride through through the streets of Los Angeles. Photo credit: Amanda Reveles

Although “420” is not a national holiday, it has become a very celebrated day for many. Not only from those who rejoiced when medical marijuana became legalized, but also by those who have incorporated marijuana into their daily or weekly routine.

The Sundial interviewed CSUN students about how marijuana has become a normal part of their life. They shared their thoughts on how being a user helps them and on the expenses that come along with the herb. We listened to CSUN students Jackie, an ecology and evolutionary major; Julio, a nursing major; and education studies major Colton. All these students requested that their last name remain anonymous.

Do you incorporate marijuana in your daily life?

Jackie: I don’t smoke marijuana every day, but there are times when I smoke it a few days in a row. Generally, I smoke marijuana two weeks out of the month. I do it either recreationally with my friends, or just by myself.

Julio: I actually do smoke almost every day or every other day. At one point it was only about once in a while or whenever I was very stressed.

Why and how does it help you?

Jackie: It helps me in many ways because I have bipolar disorder and anxiety disorder. Basically, when I get anxious, it lowers my heart rate and keeps me from panicking. When I’m depressed, it helps me feel a little better because the high is a nice feeling and it makes me pretty giggly.

Julio: I actually have high anxiety issues and this helps me calm my nerves. I also suffer from migraines and sometimes regular over the counter medication doesn’t work for my migraine. Well, weed does actually help [the] majority of the time.

Colton: I use marijuana [for] recreational purposes mainly, but it also helps me personally with my anxiety.

How long have you been using it?

Jackie: For about a year or so.

Julio: Well I’ve been smoking I believe since I was about 18 years old or so.

Colton: I’ve been smoking marijuana on a regular basis for about 10 years.

How much on average does it cost you a month?

Jackie: Marijuana costs me around $20 a month for two grams.

Do you budget for this cost?

Jackie: I usually don’t spend a lot in the first place since I only smoke a bowl each time.

Julio: I actually do not but maybe I should start budgeting for it.

Colton: Yeah I do.

Have you ever struggled to afford it?

Jackie: There have been times when I don’t have money, but my friends offer me some and then the next time I have marijuana, I share with them.

Julio: Well the last month or so is when I actually first started to buy my own stuff, so I guess no I’ve never struggled to afford it.

Colton: If it ever comes to the point where it becomes unaffordable, I take tolerance breaks because I’m smoking too much.

Is it a necessity for you, if yes, how so?

Jackie: I believe that marijuana is a necessity for me because of the mental illnesses that I have.

Julio: Yes it is a necessity for me; I need it to calm down my migraines.

Colton: I wouldn’t call marijuana a necessity, but it’s an amazing alternative to other substances such as alcohol or prescription pills.

What are your thoughts on how marijuana is thought of?

Jackie: I know marijuana is associated with being lazy, dumb, and just being a bad person, but I think everyone has their own important reason for smoking, and marijuana shouldn’t be thought of with such a negative connotation.

Julio: Well I fell like it is so looked down upon by many, and while yes, it does have some effects on the body that some might consider bad, the truth is that, for someone like me that has constant migraines and suffers from this, there are no other option but to smoke weed to control the pain.

Colton: There’s been a negative stigma attached to marijuana for years, but it seems society’s outlook on the drug is changing.

What are your thoughts on legalizing marijuana in California?

Julio: Legalizing marijuana wouldn’t be a bad thing. There are pros to legalizing it, but there are also cons.

Colton: I think it most definitely should be legalized for recreational use. You can get a prescription for marijuana for sneezing anyways, so if the argument is “sick people can have it, but healthy people don’t need it,” at this point it’s invalid. Like most things, the rules revolve around money.