CSUN student known to be a present-day innovator 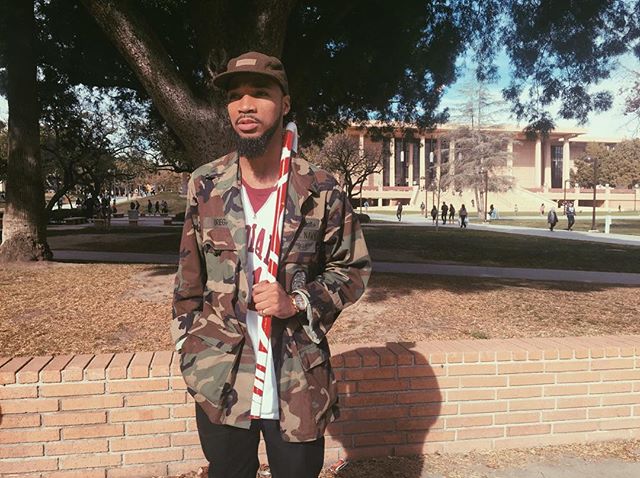 With young activists expressing their frustration on the lack of equality and freedom in the African American community, Senior Joshua Briggs created the a documentary “The Right Fight” along with the Associate Producer and writer Elizabeth Smith, Director of Photography Mario Castro, sound and post production Christopher Brown and editor Jessica Gonzalez.

“Briggs has been involved in many organizations on campus that honor and educate on Black (African) American culture,” said Professor Thelma Vickroy, in Cinema Television Arts. She is also the executive producer on the project, and a mentor for Briggs.

Rhen C. Bass, Graduate Advisor of Upsilon Chapter said he brings an extraordinary level of leadership and people skills to the fraternity Kappa Alpha Psi and in the campus community. Josh’s history of working with social justice issues on campus that impacts the minority students and his eagerness to help youth is a testament to his spirit of giving back to society.

Briggs finds himself becoming politically conscious with the events that have taken place within the African American community. He followed several cases and news stories for an entire semester prior to starting his documentary, “The Right Fight.”

“I felt like it is my responsibility to kind of make something that was relevant, it is very emotional subject to speak upon,” said Briggs. It gives him a better understanding of himself to know his African American culture.

“He impresses me with working to pay his college educational expenses and while truly enjoying the full undergraduate college experience,” said Bass.” “Balancing work, the rigors of higher education, and an active campus involvement are commendable qualities in a college student,” Bass said.

Briggs is working now on expanding his production company NuSpect, the goal is to give all students from high school to college a chance to tell their story. “Social media gives us the power to ensure that we are promoting images we want to see, something outside of what we see every day,” said Briggs.

He explained one side of the story that has not been told. The oppressor has always been the one to tell story about the oppressed. The stories told by the oppressed don’t get told enough. Through his company Briggs intend on telling these stories from a new perspective with integrity. “We need more true stories in the media,” said Briggs.

Josh is now finished with two projects will be on screen at the Writers Guild of America Theater on this year Cinema Television and Arts showcase. “The Right Fight” and another “Take the Money and Run.” This one is about two low level crooks who steal thousands of dollars from a local pizza restaurant and are caught by the owner. Who turns out to be a well-known gangster in the valley. It is on May 15, 2016.

“His innovative approach to unveil current social issues, combined with his television production skills creates a very efficient way to reach the masses,” said Bass. “Josh will go very far in life and carry others with him to success,” he said.

“I am so proud of the entire documentary team for producing this piece. I can’t wait until it is shown,” said Briggs. Through NuSpect he plans on providing internships to CSUN students and other productions within the city.