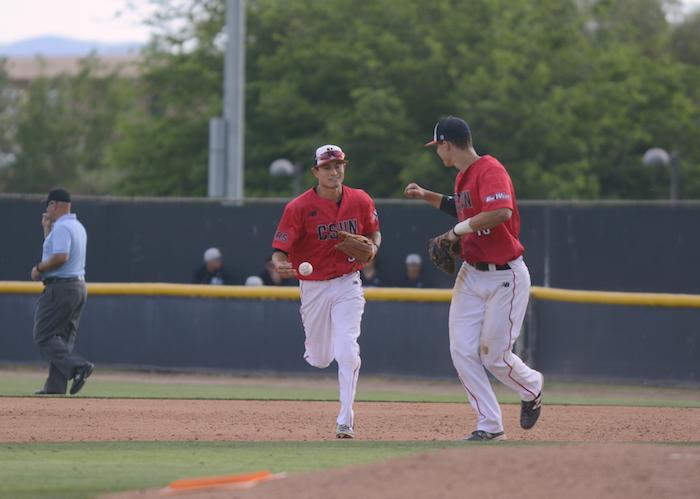 Despite having long win streaks and beating Pac-12 teams, such as UCLA, the Matadors are currently struggling to match the success of the first half of the season.

Although CSUN holds an overall record of 22-13, their conference record of 1-8 puts them in sixth place in the Big West.

At one point, the Matadors had a 13 game win streak, none of which were conference games. One of those wins included a record set by UCLA on March 8.

With seven Matadors hit, two of them twice, the Bruins set the record for most hit batters in a single game.

In that game, CSUN scored 20 runs, the most runs so far this season.

Unfortunately, the Matadors began to struggle and have lost 10 of their last 14 games.

“It comes down to execution,” Moore said. “We’re in that lull right now in terms of getting the job done consistently. It’s not an adjustment, it’s a continuation. The team has to continue to work.”

Part of what made the first half of their season so successful was the performance of both utility men and starters who hit impressive numbers.

Of those key players, junior infielder Fred Smith leads the team in batting average with .346 and hits with 54.

Also contributing to the team’s success is senior infielder Branden Berry. He is currently second on the team in batting average (.331), first in doubles with eight, RBIs with 28, on base percentage with .465, as well as tied for first with sophomore catcher Albee Weiss in homers with six.

Lucky to have star hitters on their roster, the Matadors have also been fortunate to have a bullpen with depth.

The team’s pitching staff holds an ERA of 3.37, with only 13 home runs given up.

Sophomore southpaw Kenny Rosenberg is first in innings pitched with 60.1 and strikeouts with 77. He has an ERA of 2.98 with a record of 4-1.

Rosenberg pitched his first complete game on March 25 against the University of Portland, allowing only four hits and one earned run, and striking out nine.

He said that it was one of those games where he didn’t know what was happening until it was over and realized they won 2-1.

“For me it was personal accomplishment, but more importantly it was good to get a team win,” Rosenberg said.

The success he’s had so far can be credited to the approach Rodriguez takes on the mound.

“I take a simple approach on the mound and that is attack,” he said. “That word is a reminder for me to know what I need to get done, which is help the guy next to me take an aggressive and relentless approach.”

Although the team is struggling, Rodriguez said himself and his team are ready to fight for what they believe they can do.

Coach Moore said that as of late, when the team stumbles early in the game, they’re unable to recover and get either the offense or the pitching going again.

Rosenberg said it’s hard to pinpoint what needs to change, but agrees that the team needs to focus on what they were doing best, continue that and the wins will fall into place.

But with 20 games left in the season, 15 in conference, CSUN still has a chance to upset the competition and improve their record.

“If you try to win games, and try to change who you are as a team, you’re gonna end up doing the opposite,” Rosenberg said.