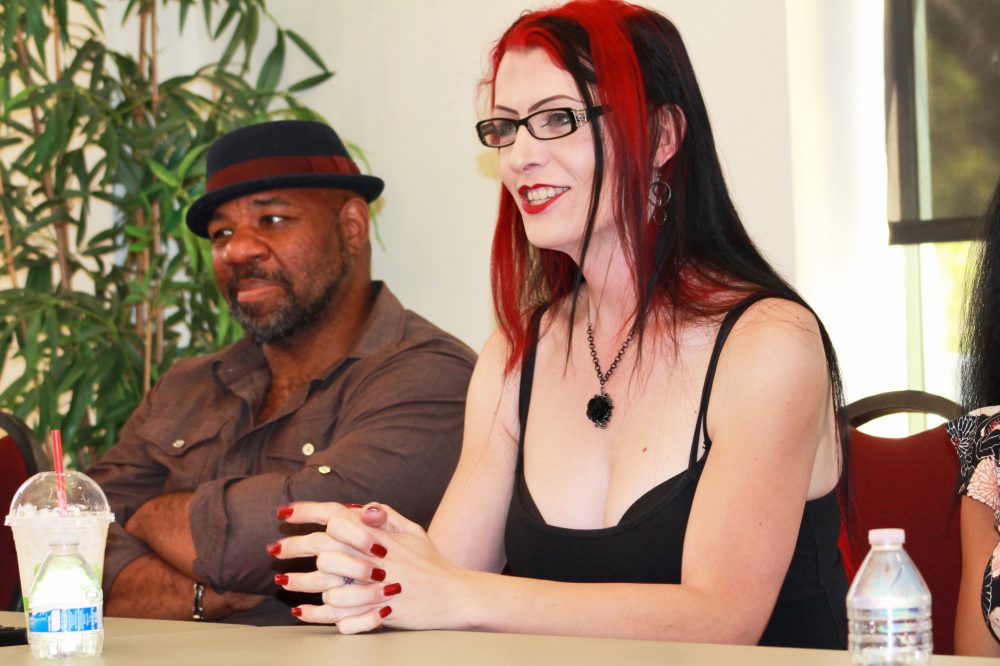 CSUN grad student Scarlett opened up the conversation by informing the audience about the five percent of sex workers on the campus. (Ashley Grant/The Sundial) Photo credit: Ashley Grant

Stigmas and stereotypes, associated with individuals in the sex work industry, were discussed at CSUN to offer students a better understanding of their career.

The Women’s Research and Resource Center held a panel discussion titled “Intersectionalities of Sex Work” at the Thousand Oaks Room in the USU building, on Tuesday night.

During the panel, discussion topics such as class, race, gender and sexuality were focused on in hopes of allowing the audience to get a better insight of the ins and outs of a sex worker’s life.

“I am a woman of trans-experience. When it comes to people in my community, a lot of trans women are involved in sex work not necessarily voluntarily, not necessarily forcefully, but because that is their only survival method,” said Scarlett.

Throughout her time as a sex worker, Scarlett found that there was a lot of stigma associated with sex work and felt the need for others to be educated about the topic.

“Sex workers are amongst you. I’ve been on this campus for five years now and I’m a sex worker. I can’t stand it when I go into a classroom and hear the judgment and I hear the comments,” Scarlett said. “Sex work is something you engage in voluntarily past the age of consent and something you do for the betterment of your life or for whatever reason you choose.”

Panel discussion flowed for a solid two hours while experiences were shared, negative outlooks were broken down and sex work was brought into a clearer light.

Although Black’s clientele know what they are signing up for, he has found that there is sometimes a fine line between what is okay and what can be held against him in court due to the stereotypes placed around being a black heterosexual male.

Cupcake Sinclair, a professional submissive and adult performer began her sex work journey when she turned eighteen and throughout that time has found her race can affect the work in which she gets, but hasn’t let that prevent her from producing her own material.

Amina, 21, a professional cam model and escort began her sex work career only a year ago and has found that being apart of the industry has allowed her to connect with people on a deeper level where there isn’t judgment or an impossible expectation to meet.

Joey Reynoso, a queer Chicano male not only is a sex worker, but also prides himself on creating music and artwork.

“I began doing sex work when I was nineteen and became homeless. This is a very popular narrative for LGBT people where your family finds out about you being queer and they put you out on the street,” Reynoso said. “When my parents kicked me out I was freaking out, living out of my car and so I started to do sex work.”

According to Reynoso there are two types of sex work: survival sex in which someone engages in sexual activities in order to receive food, shelter and clothing and traditional sex work where it is a profession and a choice.

“I use to be a prostitute and I feel like there shouldn’t be a stigma around that word,” Reynoso said. “I think if I’m proud of it and I’m proud of the experience than I feel like I can call myself whatever I want.”

After the panel spoke about various personal topics related to sex work, the floor was open to questions.

The “Intersectionalities of Sex Work” panel discussion was the third part to the “Behind Closed Doors” series.