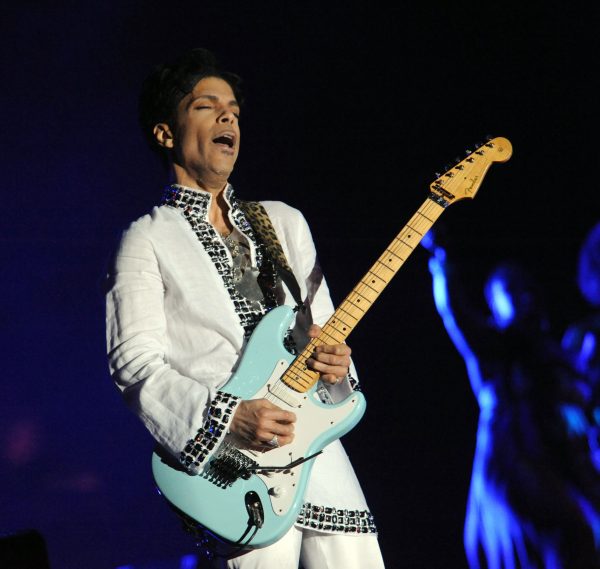 Prince performs at the 2008 Coachella Valley Music and Arts Festival in Indio, Calif. The musician died in his home recording studio in Chanhassen, Minn., on Thursday, April 21, 2016. He was 57. (Jason Moore/Zuma Press/TNS)

Prince, an American superstar, actor and pioneer in pop music for over three decades died today at age 57.

During his career, he sold more than 100 million records, won an Oscar, earned 30 Grammy Award nominations and won seven.

The “Purple Rain” singer’s publicist confirmed in a statement Thursday he died in his home at Paisley Park Studios in Chanhassen, Minnesota.

Music artists and fans blew up Twitter with reactions to his death.

i promise this was the greatest moment of my entire life. i wish i could relive it everyday. pic.twitter.com/i7oax7tLYr

i can't believe what's happening right now. i just woke up but it feels like I'm dreaming. we live in a world where Prince passes away???

Why are so many legends dying this year, this is devastating…

"Dearly beloved, we are gathered here today to get through this thing called life." – #Prince #RIP pic.twitter.com/n5DkRYQxTk

Rest In Paradise Prince and thank you for blessing us all with your work n presence ??

This fucking sucks… Prince on repeat all day. Just like I did with Michael and Whitney ?

Today is the worst day ever. Prince R.I.P I am crying!

Numb. Stunned. This can't be real.

And just like that…the world lost a lot of magic ? Rest in peace Prince! Thanks for giving us so much…

So sad about @prince ….. You will be so missed.

This is so heartbreaking? I had this Prince pic drawn on my wall years ago because his music inspired so many R.I.P? pic.twitter.com/60msa6hm3I

Rest in peace to one of my favorite artists of all time. Haven't loved an artist as long or as… https://t.co/U7rCuNk95N

I LOVED him, the world LOVED him. Now he's at peace with his Father. Rest in power, @prince, my brother. pic.twitter.com/ZN6cc3WWuF

Rest in peace Prince. Thank you for the music that will live on forever ??

Only Prince. Through my speakers. Today and tonight.

R.I.P to one of the greatest living musicians and artists of the last 100 years… Prince, u changed our lives. We will miss u forever