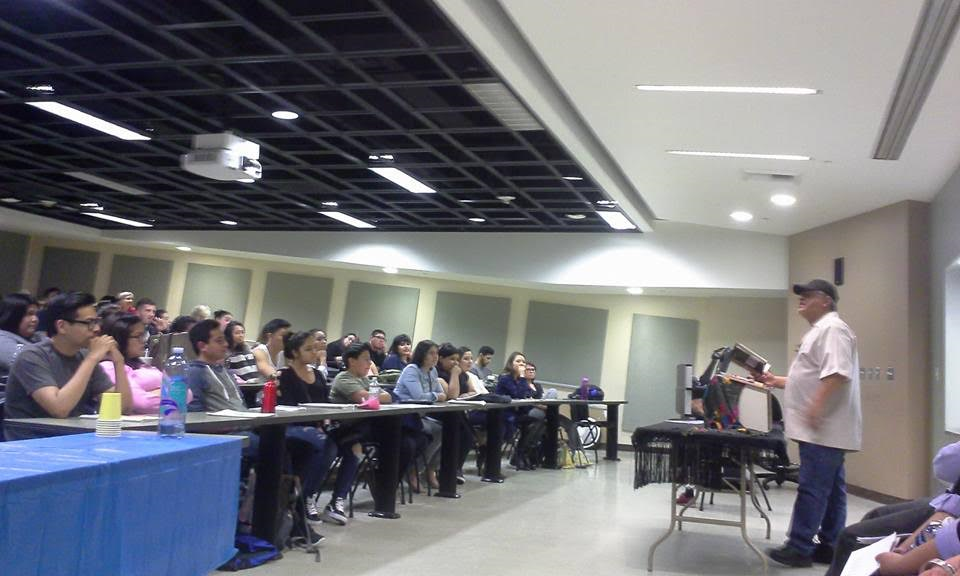 Rodriguez gives a reading at the Oviatt Library. Courtesy of Luis J. Rodriguez.

A series of workshops titled, “Men’s Healing Circle,” encourage male students to speak openly about the issues they face in their everyday lives.

These workshops are sponsored by the Chicana/o Studies department and are presented by Luis J. Rodriguez, a new professor this semester at CSUN. They have been scheduled to run for one day out of the month, for three months.

The workshops are designed to allow students to express themselves however they wish. Whether it is through song, poetry or dance, students can explore their rage and feelings regarding abandonment, shame and betrayal in order to become better individuals.

Rodriguez said these workshops began after the Chicana/o Studies department invited him to teach at the university this semester.

“I know people at CSUN’s counseling services,” Rodriguez said. “They know I’ve been doing these circles for a while and thought it would be a good idea for me to bring them here.”

Rodriguez has done many of these healing circles at various locations, including prisons.

“The prisoners have a lot of rage,” Rodriguez said. “We need to get through the rage, in order to get to the grief, so the healing process can begin. They are hungry for a safe space to speak about their issues.”

When Rodriguez first began the workshops, he passed out flyers to grab the attention of students who were eager to find a community to feel comfortable in. He also said the groups have been successful since they began last month.

“We’ve had a group of six to eight guys come every session and some have become regulars,” Rodriguez said. “It has been pretty positive.”

Rodriguez hopes to continue the workshops through the summer and if he returns to the university next semester, he will establish them again.

The last workshop will be held on Wednesday, May 4 in Jacaranda Hall in room 1552. All are invited to attend.