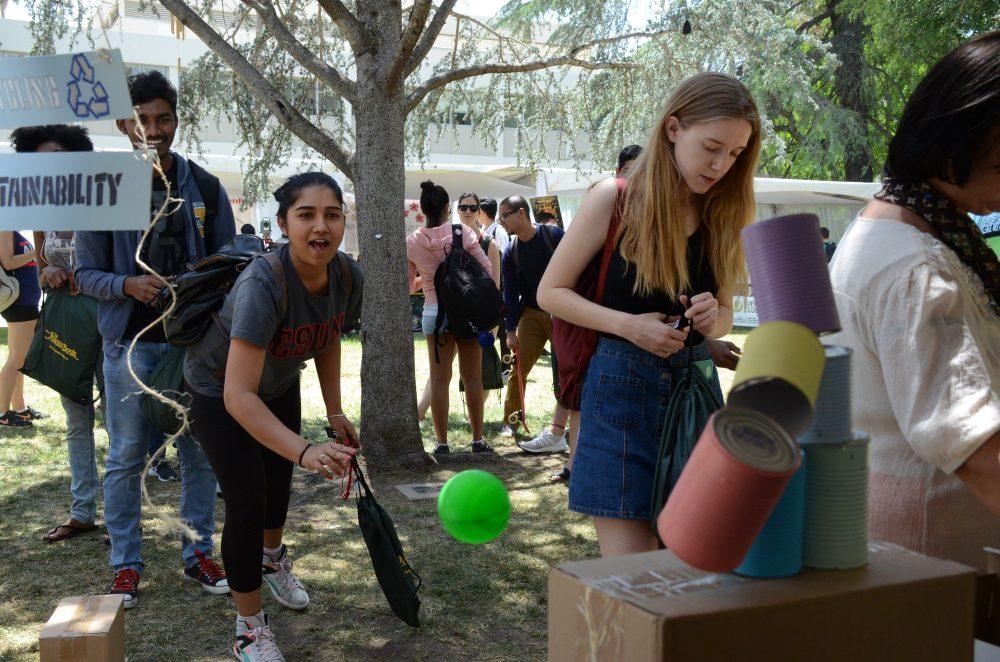 Student Gayana Karade throws a ball in order to knock down the cans to win a prize at the Associated Students recycling booth during the Earth Day Fair that took place in front of Bayramian Hall on April 21. Photo credit: Erik Luna

The Bayramian lawn was alive in celebration of Earth Day with music, art, food, jewels, a Tesla on display and more during Thursday’s Earth Fair.

Students relaxed amidst the event in hammocks stretched underneath shady trees, while “The Delatz” played music under a tent on the lawn. Activities such as tree planting, documentary screenings, dance circles, and speeches by Paul Scott and Amber Thompson encouraged students to interact. An assortment of booths and vendors surrounded the area with information about different environmental topics.

Joseph was stationed at the “Rock Sale” booth where many exotic rocks and minerals were laid out on display for students to examine and purchase.

“We’re here to show students what the different processes of the Earth can do,” Joseph said. He explained that each rock on display was made completely through natural processes.

Free samples of acai bowls and energy drinks were given to passersby at the Sambazon booth, which represented the acai bowl and smoothie bar from San Clemente.

“The benefit of the acai berry, which is only grown in Brazil, is that it’s a Superfood, so it’s very rich in antioxidants, Omega 3s, fatty acids, and, when you pair it with toppings like hemp seeds in smoothies or bowls, you can add other elements to an already Superfood that’s great for you,” said Tysha Williams, spokesperson for Sambazon. Acai can be found at any local grocer and plant based, gluten free, and vegan, she said.

Sustainability was also a popular topic at the fair. Computer Information Technology Major Jim Tario explained the benefits of using and producing renewable energy at the GRID Sustainability booth.

“What we’re doing right now, at least we’re changing something,” Tario said. He explained that GRID Sustainability’s mission is to provide and install solar panels to the homes of low-income families. Solar panels do not emit harmful gases to the air and are able to be reused for a long time.

“I know it’s gonna be less hurtful to the environment to build these panels. Especially in California, solar will be the main thing,” Tario said.

Along with environmental sustainability, the Earth Fair also promoted physical and emotional health through natural methods. There were massage tents where students could sign up for a free massage, yoga, and a meditation booth.

At the Mayan Rose booth, Christian Anca informed students about the natural ways to relieve stress and upset energy. Natural crystals and gemstones act as amplifiers for certain energies because of the energy and elements they were formed with in the ground, Anca said.

“We’re educating people, basically how to stay out of trouble; how to keep their emotions in tact. Through meditation, through yoga, through contemplation, through being consciously aware and present, you can achieve your wildest dreams,” Anca said.

Other vendors at the Earth Fair informed students of outdoor camping and hiking possibilities, water conservation, recycling and composting, marine life and ocean health, geaography of CSUN, and the making of the remake of the movie Jungle Book. The Earth Fair is an all day event held each year and put on by the Associated Students at CSUN.