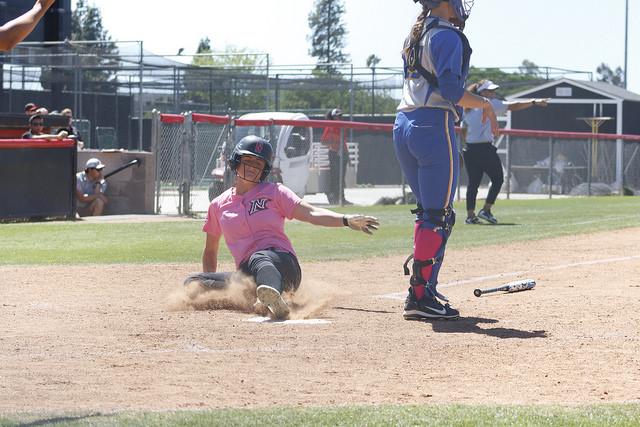 This far into the season, CSUN is exceeding expectations, currently being in second place.

With a Big West record of 5-4 during conference play, CSUN has an overall record of 25-19, and has 12 games remaining in the regular season. The team has also won two out of the three games in each of its last two series against UCSB and the University of Hawaii.

Sophomore infielder Savannah Horvath shared her thoughts on how CSUN can separate themselves from the teams that are currently below them in the standings.

“We just need to believe and have confidence in ourselves,” she said. “We can’t let games slip away, we’re usually right there and hanging in; the more that we take advantage of the mistakes the other teams give us, and the more that we get the lead early will be key for us.”

To this point in the season, the Cal State Fullerton Titans have dominated Big West Conference play. In first place overall with a conference record of 9-0, the Titans have an overall record of 35-10 on the season. They are also currently ranked 27th out of all NCAA Division-I softball teams.

Coach Tairia Flowers is confident that the Matadors can gain some ground on Cal State Fullerton by being consistent in their play.

“If we can just play our game we’ll be alright,” she said. “Our game is being aggressive and having fun with playing, and being able to put pressure on the defense; we have a lot of speed and versatility, so if we can get people moving around and staying in motion on the field, I think good things are going to happen.”

Overall for the Matadors on offense, junior outfielder Taylor Glover is having one of the most outstanding seasons in the entire country. Currently hitting .469, Glover has the tenth highest batting average out of all Division-I players. She leads the team with 68 hits, she also is second in runs scored (32), second in stolen bases (16) and tied for first in RBIs (27).

“No matter the outcome of the game before, or the last plate appearance, I try to take each at-bat with a new perspective and outlook,” she said. “I think that’s helped me keep calm and relaxed, and trust my own skill.”

After a fine freshman season in which she hit .326 with nine home runs, Horvath is putting together another solid offensive season.

Horvath leads all Matadors softball players this far with 10 home runs (Glover’s six is second). She also leads the team with her 40 runs scored and 17 stolen bases, is second in batting average (.310), tied for first in RBIs (27), and second in hits (44).

On the opposite side of the ball, junior pitcher Daphne Pofek leads CSUN with 12 wins and an ERA of 3.10. Her 72 strike out is also first on the team, while appearing in the second most games for the pitching staff (24).

Freshman pitcher Taylor Troost has arrived on campus showing promise in her first season with the team. Troost is second on the team with six wins and an ERA of 3.37, and has appeared in the most games for the Matadors thus far (25).

CSUN’s next series will be on the road, as the team plays the Cal Poly Mustangs (19-17, 3-6 Big West) starting Saturday. The three-game series features a double-header on Saturday, before playing the last game on Sunday.