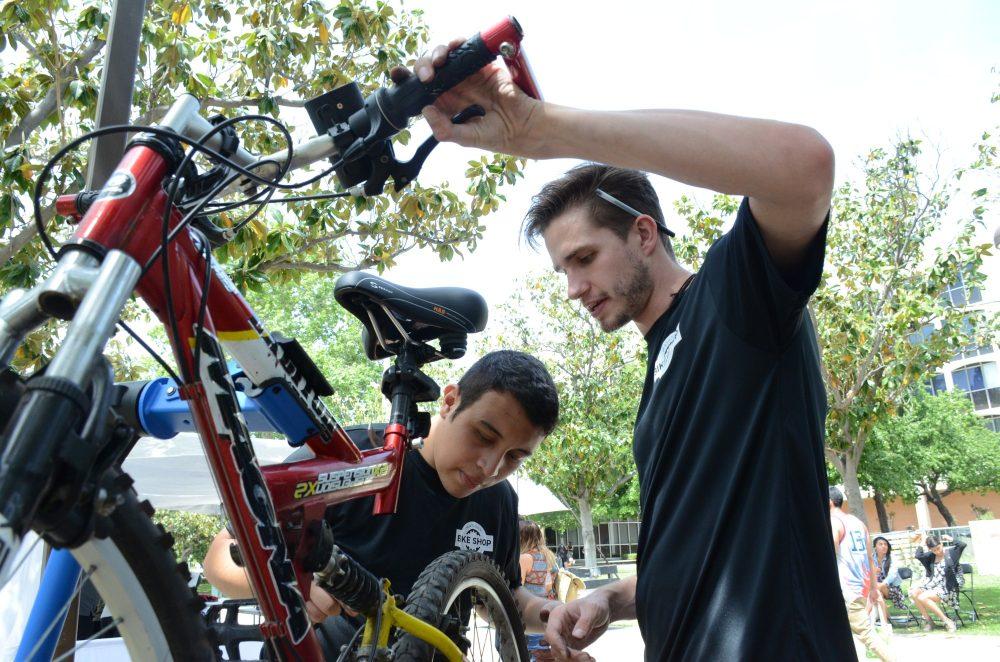 Bike mechanics for the Matador Bike Shop Ezequiel Chicas, left, and Alec Niven work on tightening the brakes of a bicycle a student left with them during the Earth Day Fair in front of Bayramian Hall on April 21. Photo credit: Erik Luna

No more bike troubles on campus because soon your next bike shop might drive to you.

The Associated Students officially opened up their anticipated mobile bike shop, which will help student cyclists around CSUN with any bike issues, during the Earth Day Fair that took place April 21.

The bike shop will offer help to student cyclists and will carry items, such as inner tubes for bicycles, available to students for free until the end of the spring semester.

A.S. President Jorge Reyes opened up the shop with a ceremonial ribbon cutting during the fair, and went on to say how much the shop meant to him.

“This project primarily came into fruition three years ago when I was a senator for A.S.,” Reyes said. “And although we weren’t able to put plans into motion back then, I’m glad that [the shop] is finally opening —especially as I’m about to leave office.”

One of Reyes’ visions for the bike shop was for it to be mobile. At the moment, the mobile bike shop will remain open until May 20. It will reopen in the fall semester. An official schedule for the mobile shop will be released soon.

According to Christine Upton, the Outdoor Adventures coordinator, the bike shop will help students with any problems their bicycles might be facing, but students must pay for the parts that they need.

“We will basically provide free labor, but students must pay for the cost of the parts,” Upton said. “We will take care of the installations that they need.”

Using funds allocated to them by A.S., Upton and the rest of the bike shop crew were able to get the truck, bicycle tools and other essential items needed to run the shop, which Upton hopes will be ran by students in the near future.

Another problem the bike shop wants to talk about is the increasing number of bicycle thefts at CSUN. Student supervisor Christopher Gonzalez said that they would like to teach students how to properly lock up their bicycles.

“Each bike rack on campus has a specific way to lock up a bicycle,” Gonzalez said. “You would usually want to lock up the front tire to the body of the bicycle, because the front tire is more commonly stolen.”

As the bike shop opened, a crowd of students and faculty gathered around to ask questions about the shop.

Cyclist Andrea Garcia stood in the crowd with her Italvega bike in front of her. Garcia, an alumna of CSUN, found that the shop could benefit the surrounding community.

“I’ve been on a bicycle since middle school, and living less than a mile away has helped me commute on bike every day,” Garcia said. “[The shop] is something that’ll help students, especially the people that live around the area.”