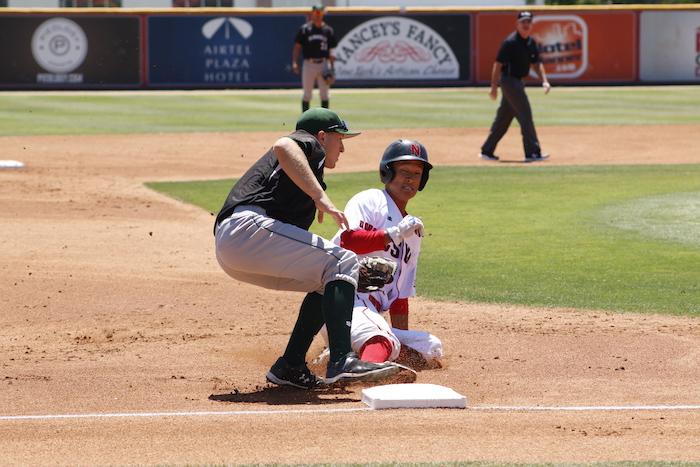 Senior shortstop Yusuke Akitoshi slides for third base against the University of Hawaii Warriors on April 23, 2016. Akitoshi finished the game with one run on three hits. Photo credit: Josue Aguilar

After the sending the game to extra innings, the CSUN baseball team failed to rally against conference rival the University of Hawaii Rainbow Warriors, losing 6-5 on Saturday afternoon.

Sophomore pitcher Kenny Rosenberg started got off to a solid start, striking out three out of the first four players.

However, Rosenberg would only strike out four more players in six innings, and gave up three runs.

At the plate, the Matadors got on the board in the third inning after sophomore outfielder Justin Toerner smacked a triple to right center field, brining senior shortstop Yusuke Akitoshi home, giving CSUN a 1-0 lead.

Senior outfielder Branden Berry increased the lead to 2-0 in the fifth inning with a home run to left field.

The Rainbow Warriors scored again in the same inning after a fly out allowed Hawaii infielder Jonathan Weeks to score from third base, tying the score at 2-2.

The Matadors retaliated in the 6th inning with another home run, this time by junior infielder Fred Smith, his first of the season, shifting the lead back to CSUN 3-2.

Coach Greg Moore had confidence in O’neil despite having played the first game in the series.

“He’s so resilient himself, he’s got a rubber arm, the threw about 20 pitches yesterday,” Moore said. “He bounced back today I thought he was pretty good at times, threw his fast ball better than he’s thrown in about two weeks or so.”

CSUN did not see the lead again as Hawaii scored two more runs in the seventh inning, making it 5-3.

Despite this the Matadors kept fighting. In the bottom of the seventh inning sophomore outfielder Elias Orona scored from third after a Smith fly out to close the gap at 5-4.

In the bottom of the eighth inning after Bumstead and junior catcher Dylan Alexander got on base on singles, freshman infielder Derek Molina came in to pinch run for Bumstead. An Orona single up the middle brought home Molina, again tying the game at 5-5.

Moore was proud of how his team kept battling, “We continued, to play we put some pressure on the defense,” Moore said. “We just didn’t get the time or the hit when we needed it.”

The Matadors managed to send the game to extra innings. However, Hawaii catcher Kekai Rios hit a decisive home run to start the 10th inning, giving them lead 6-5.

On the loss Moore said the team will continue to work. “We’re going to come back tomorrow and work to get the series and just kind of go game by game,” Moore said.

The loss gave CSUN its ninth loss in Big West Conference play and drops them to 23-14 overall. They are now eighth in Big West standings.

The Matadors will again play Hawaii on Sunday at 1 p.m at Matador Field to complete the three-game series.